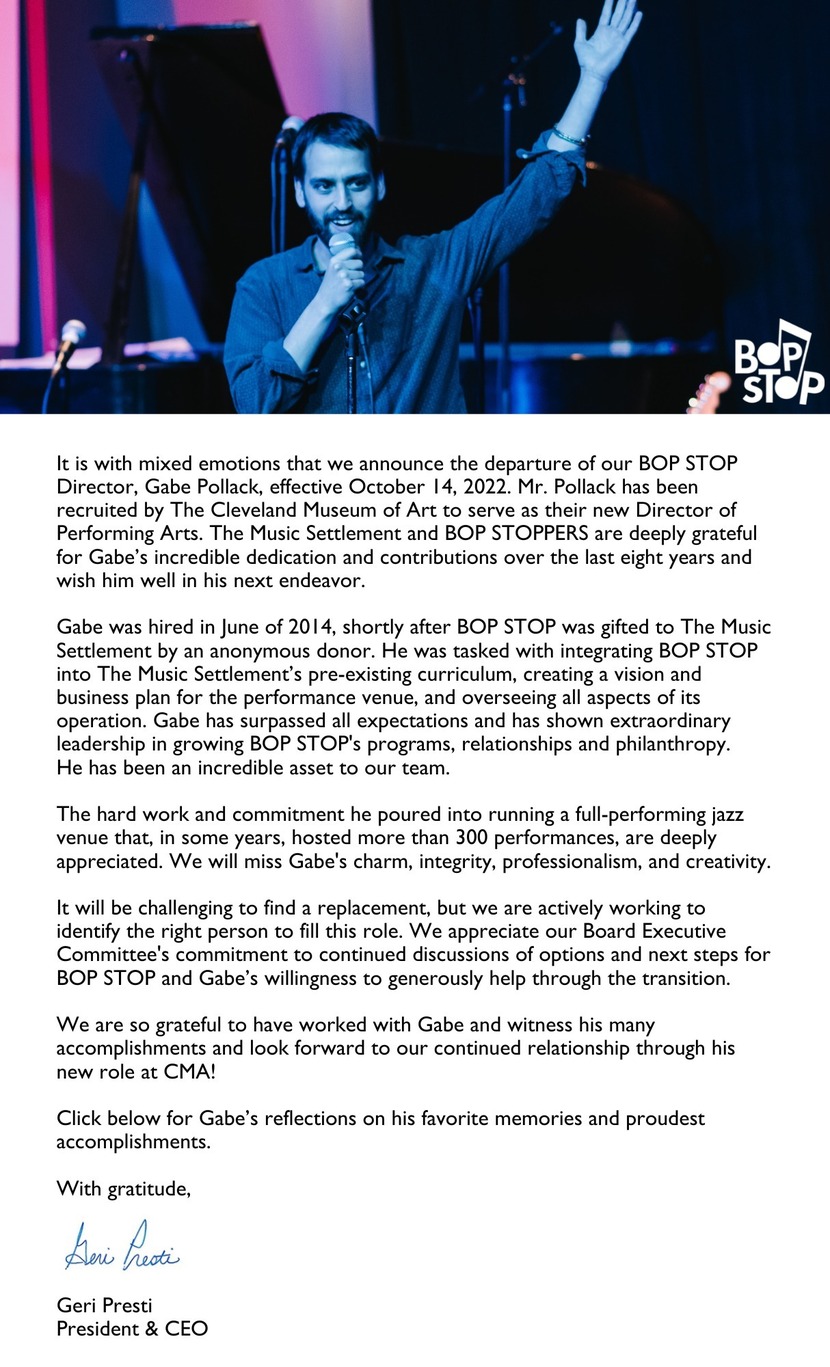 We sat down with Gabe to hear his reflections and proudest moments while Director of BOP STOP.

Question: How long have you been at BOP STOP and what are your key responsibilities?

Gabe: I was hired in June 2014 as BOP STOP Manager. Although I was hired in June 2014, I began presenting regularly scheduled programs in October of 2014. The following year I was promoted to Director of BOP STOP and have been in that role ever since. In my role as Director, I was tasked with integrating the BOP STOP into The Music Settlement’s preexisting curriculum, creating a vision and business plan for BOP STOP, and overseeing all aspects of its operation. BOP STOP hosts recording sessions, master classes, rehearsals, and private events during the day and operates as a live performance space with an active kitchen and bar at night. Our kitchen partnership with Metro45 is one of many special characteristics of BOP STOP.

Question: What are you most proud of accomplishing at BOP STOP?

Gabe: I'm really proud of the creative community that BOP STOP has helped to cultivate. When establishing a new venue owned by The Music Settlement in Cleveland, I wanted to create a space that added something new to Northeast Ohio’s cultural landscape rather than replicate the programming of other establishments. I have always thought of BOP STOP as a venue for Cleveland, not a venue for myself. This mindset forged a venue that the community actively participates with and wants to support. BOP STOP has partnered with hundreds of local organizations and the club continuously honors local musicians and local history while also presenting national and international artists.

Over 2,000 concerts later, BOP STOP has presented over 180 Grammy winners or nominees and has received national recognition in numerous publications including New York Magazine. In 2019, BOP STOP was voted Best Jazz Club in America by readers of All About Jazz. While earning these accolades BOP STOP’s operating budget and attendance have substantially increased. Additionally, BOP STOP has become an essential player in shaping Hingetown into a destination with a unique identity. Since revitalizing BOP STOP, vacant lots and storefronts have blossomed into thriving establishments that support a diverse collective of creatives and entrepreneurs.

Question: What are some of your favorite memories at BOP STOP?

Gabe: I have so many great memories from my time at BOP STOP! Recording Terence Blanchard's record entitled Live stands out as a very special concert. Terence included part of my introduction on the album so I can be heard on a Blue Note record!

I also have enjoyed watching music students grow into professional players. Often times, I first hear a college student play on our stage as a Freshman, hear them progress through four years of college, and then I end up hiring them for gigs after they graduate.

Live At The BOP STOP, the radio show we produce at the venue has been a really rewarding experience as well. The radio program is currently broadcast on 24 terrestrial radio stations across the country and even has a couple of international affiliates. The show features music performed live on the BOP STOP stage.

Question: You have been such an asset to our team. What will you miss most about being a part of The Music Settlement?

Gabe: I was hired at The Music Settlement when I was 26 years old. When I was handed the keys to the BOP STOP, I couldn't believe that I was about to live my childhood dream of operating a jazz venue. I'm grateful that The Music Settlement believed in me at such a young age and supported my artistic vision for the space. I'm going to miss late night jam sessions, talking to customers across the bar, and listening to live music at least five nights every week. I am looking forward to connecting and interacting with folks in a new capacity outside of my role at BOP STOP.

As a huge fan of Cleveland's creative music and performing arts scene, I'm looking forward to the next stage in my career as Director of Performing Arts at Cleveland Museum of Art.