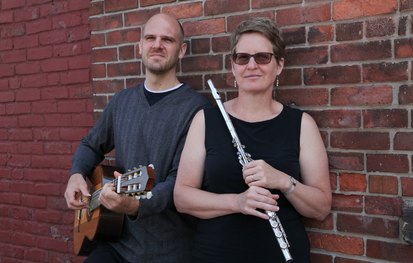 The Gruca White Ensemble was formed in April 2013 as part of The Music Settlement’s Centennial Celebration, and became Artists in Residence for the vibrant Cleveland community music school the following year. Classical Guitarist Robert Gruca and flutist Linda White offer an entirely new concert experience by alternating the best of the flute and guitar repertoire, their own arrangements of latin, jazz, and rock tunes with a short impromptus - improvised jams in a variety of styles that will make you want to join in. With each concert, a new experience unfolds which will take your ears and your imagination on a unique ride.

This Concert is FREE with a $5 suggested donation