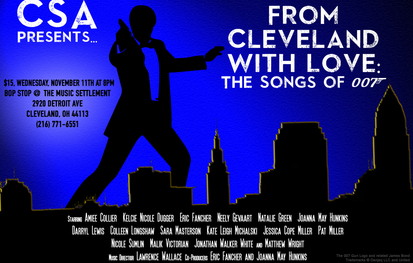 The songs of the James Bond franchise have often become as celebrated in popular culture as the films themselves. Ranging from Paul McCartney’s rock anthem “Live and Let Die” to Carly Simon’s understated “Nobody Does It Better” and Shirley Bassey’s iconic “Goldfinger” to Adele’s Academy Award winning “Skyfall.” Some of Northeast Ohio’s top talent comes together to perform new and familiar arrangements of the classic tunes accompanied by a live band. The concert occurs the same week as the highly anticipated release of the newest James Bond film, Spectre.

The Cleveland Stage Alliance is an organization dedicated to providing theatergoers with up-to-date information regarding any and all locally produced theatre in the Northeast Ohio region. "From Cleveland With Love: The Songs of 007" is the third concert in the CSA’s new concert series that celebrates various beloved aspects of pop culture in a festive evening of song.

To find out more about the Cleveland Stage Alliance, visit http://www.clevelandstagealliance.com/