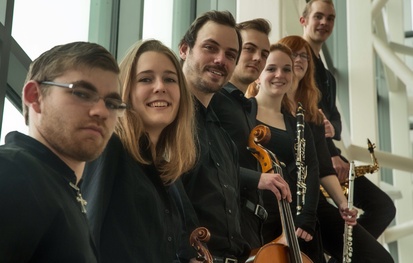 Program Description: Music in their Words

The New Music Ensemble at Grand Valley State University is an undergraduate ensemble that promotes the music of our time through commissions, tours, recordings, collaborations, outreach events, and workshops. Founded in 2006 by its director Bill Ryan, the ensemble not only prepares students for careers that include contemporary music, but also helps them to become exceptional educators, advocates, and leaders in the field.

The group has been profiled in numerous publications including Newsweek, the New York Times, and Billboard Magazine, and featured on NPR’s Weekend Edition, All Things Considered, and WNYC's Radiolab. In addition to concerts around campus, they have performed at the Bang On a Can Marathon in New York, the College Music Society National Conference in Atlanta, as members of the all-star ensemble assembled by the Kronos Quartet to perform on the In C 45th Anniversary concert at Carnegie Hall, New York’s (le) Poisson Rouge, New Music Detroit's Strange Beautiful Music marathon, the Make Music New York festival (Morningside Park), Chicago's Millennium Park, and at New York’s Lincoln Center Out of Doors Festival to help premiere Sila, by Grammy and Pulitzer Prize winner John Luther Adams.

The ensemble has released three critically acclaimed recordings named to best release lists by the New York Times, Washington Post, LA Weekly, Time Out Chicago, and many others. Tracks from their second CD, In C Remixed, can be heard on MTV's series Teen Wolf, as well as the upcoming documentary film As I AM: the Life and Times of DJ AM, airing on Showtime February 2016. Excerpts from their first CD, Steve Reich's Music for 18 Musicians, were used as the soundtrack to Michael Langan's award winning short film Choros, which has been screened at over sixty-five film festivals around the world. This CD was named one of the top five classical recordings of the decade by WNYC’s John Schaefer, as well as the #1 classical recording of the decade in the WNYC Soundcheck listener poll.

The ensemble has completed two tours: a weeklong trip throughout the mid-Atlantic United States, and a ten-day trip to five National Parks throughout the Southwest United States. Through the support of a New Music USA Project Grant, in 2015-16 they will be touring their Music in their Words project, in which notable composers were commissioned to create works based on the speaking voice of landmark Twentieth Century composers. During summer 2016 they will embark on a two- week tour of northwest national parks, funded by the National Endowment of the Arts.

Actively engaged in the creation of new works, the ensemble has commissioned and premiered thirty-three compositions by composers including Marc Mellits, Sarah Kirkland Snider, Anna Clyne, Michael Lowenstern, Zoe Keating, David Lang, Jad Abumrad, and David Biedenbender, as well as over 150 student compositions. Their YouTube videos recently passed 1.5 million views, all without the aid of a cat or Lady Gaga tune.