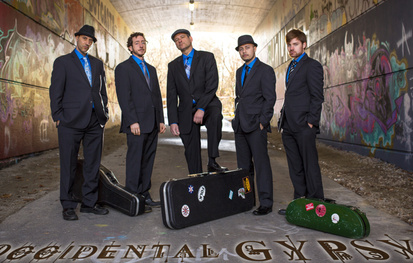 Occidental Gypsy plays an exhilarating blend of gypsy swing, jazz and world music that enraptures the listener with a complex acoustic sound, burnished by smooth vocals reminiscent of the first era of swing.

Hailing from the New England, Occidental Gypsy plays a dynamic, multi-genre mix of original vocal and instrumental pieces. And they’ve been recognized for notable covers like a “gypsyfied” take on Michael Jackson’s Thriller. The Boston Globe has named them a “Best Bet for Weekend Entertainment,” and musician David Bromberg said of the group, “great singing, fantastic guitar and violin work, with high energy originals that leave the crowd crazy. An awesome band.”

Well known as capable heirs and nouveau pioneers of the music of Django Reinhardt, Occidental Gypsy was featured at the 2015 DjangoFest in Mill Valley, California. The band has sold out legendary venues such as Nighttown in Cleveland, as well as offering workshops and shows at the Old Town School of Folk Music in Chicago, Bluebird Cafe in Nashville, The Ark in Ann Arbor, The Triple Door in Seattle and many other notable spots. The band has shared the stage with greats like Rikki Lee Jones, Jorma Kaukenen, Stanley Jordan, Joe Sample, Tony Rice, and David Bromberg. Band members have also participated in side projects that have brought them around the world alongside legends, like the 24 year old Eli Bishop who has played with Wynton Marsalis, and regularly performs at Jazz at Lincoln Center.

Occidental Gypsy’s sound is appealing to a wide spectrum of people, and their shows consistently attract enthusiastic audiences at colleges, arts centers, festivals, concert halls and clubs. Their fans include musicians who enjoy the sophisticated compositions and masterful play, but most folks just come to enjoy the music and dance. The band has found a unique beat and brings to every show a dynamic mix of original vocal and instrumental pieces– and a few memorable standards– in fun, exhilarating performances. Occidental Gypsy’s music cannot be easily classified; a bit of jazz, a catchy strain of pop, a seismic swing experience, and “a whole lotta’ gypsified groove…”