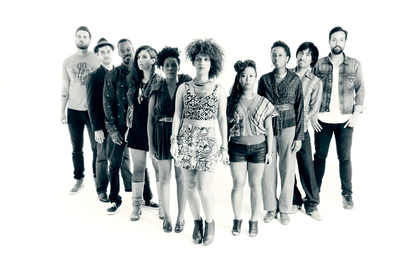 Underground System came bubbling up out of BKNY in early 2010. Originally steeped in influence and inspiration credited to Fela Kuti and the West African pioneered Afrobeat aesthetic, they have since carved out a niche that stands uniquely alone as their own. With several successful 12” single releases behind them via Ropeadope Records and Hell Yeah (Italy) and a noteworthy touring schedule to back it up (featured appearances at Burlington Jazz Fest, Bear Creak Music & Arts, Brooklyn Museum, Museum of Natural History), this forward thinking and diverse group has laid all the groundwork and is ready to aim the big guns- bringing their uncompromising and original New York bred style to a soundsystem near you.

For Underground System, their recent single release “Bella Ciao” (Out February 2014 on Ropeadope Records) is the first taste of what’s to come. A menagerie of the best kind – part baile funk MCing, part italian folk song, part afrobeat anthem – starting somewhere modern, dark, and latenight club friendly, bringing it back just in time to a bouncy and deceptively light feel, the whole while grounded in the timeless sensibility and authority of a killer live band. Set to music by founder Peter Matson and frontwoman Domenica Fossati and given life by the bands collective work in arrangement, the ever-evolving personalities and influences on this record shine brighter than ever.

No one can deny the groups power and ability to package so many disparate influences with a unifying voice, and they owe a lot to the physical presence of what is one of the most diverse and dynamic crews of players to be assembled on the ground in NYC for a long time. A few phone calls and some chance meetings set the stage early on for where they are today: 8 core members deep, split equally between gender, representing too many cultural backgrounds to list, and boasting one of the most naturally enthralling live shows around. The energy the band exudes is confident, raw, and uninhibited, engaging and inviting every audience to lose themselves in the moment. The female front line is unique in its own rite and flips the script on the stereotypical male dominated afrobeat and big band culture in a perfectly nonchalant way. No marketing ploys or calculations here, the group organically evolved and ended up this way, a true reflection of the ideals it puts forward in every performance; the music created speaks for itself.