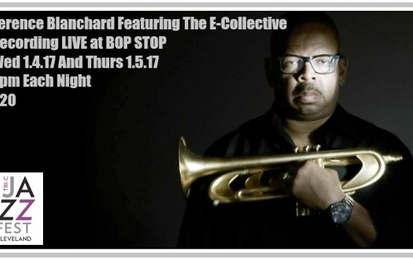 Following his critically-acclaimed 2015 CD release ‘Breathless’, Terence Blanchard and the E-Collective will record a sequel CD, ‘Caravan,’ an album which will be recorded live in three cities scarred by the escalation of tension between law enforcement and unarmed African Americans. From January 2 through 7, ‘Caravan’ will be performed and recorded in Minneapolis, Cleveland, and Dallas.

“Terence is now in his second year as Tri-C JazzFest’s artist-in-residence,” says festival director Terri Pontremoli. “He has become a part of our community – not only as a musician, composer and educator, but as a significant voice in social issues. We are really proud to be a part of this new project with our partners at BOP STOP.”

Most of the original E-Collective members return for this recording— Charles Altura (Guitar), Fabian Almazan (Piano and Synths), and Oscar Seaton (Drums). The exciting addition of young bassist David “DJ” Ginyard adds a funk dynamic to an already groove-based sound. “This band represents the best of America's ideals. We're five very different personalities with different visions who play together for a common goal: Creating music that hopefully heals hearts and opens minds," says Blanchard after almost two years touring with the Collective.

The live recording in Cleveland will take place at BOP STOP on Wednesday 1/4 and Thursday 1/5 at 8pm each night. This project is made possible with the generous support of Cuyahoga Community College. We are happy to announce that our community partners also include Shooting Without Bullets and SPACES Art Gallery/Michael Rakowitz.

During the performances at BOP STOP we will be serving beverages and snacks using orange dishes and glasses as an extension of Michael Rakowitz’ project entitled “A Color Removed”. A Color Removed, an art project that will be initiated in September 2018, will challenge the city of Cleveland to have a wide ranging, uncomfortable discussion on race and violence in a city where people of color do not feel safe. The color orange will be redacted throughout the city as a grass roots and civic campaign, thus removing any illusion of safety. Orange safety cones will be replaced with green ones, safety vests will be replaced with yellow reflective alternatives, basketballs will be painted over, and citizens will be invited to deposit all orange household items at various exhibition sites throughout the city for storage until the action is deemed to have delivered a satisfactory result. At the heart of this project is a question: how does it feel to live in a society where the right to safety is removed?

The artist Michael Rakowitz will initiate this campaign with involvement of social justice organizers, activists, philosophers, and all range of citizens throughout the city and beyond. Commissioned by Case Western Reserve University Beamer-Schneider Professorship in Ethics and SPACES.

Students from Shooting Without Bullets will be in attendance during the live recording to capture the process.

Shooting Without Bullets is Cleveland’s revolutionary youth photovoice program. As a community based social program, Shooting Without Bullets focuses on identity development in Black and Brown teens in Cleveland through expressive arts, photography, and open-dialogue. The program assists Cleveland youth to process complex social problems experienced by them, including police encounters, and provides an expressive platform for them to positively inform cultural norms and impact juvenile justice related reform in Cleveland and beyond.