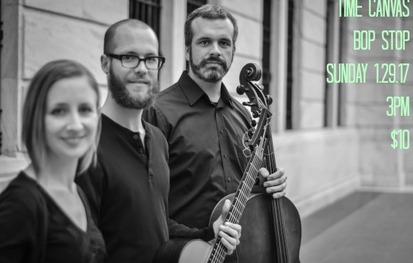 On their first program of 2017, Time Canvas continues to bridge music from early classical repertoire and new compositions. This concert features a piece by the acclaimed Finnish composer Kaija Saariaho alongside recent works by three young American composers: Nico Muhly, Josh Rodriquez, and Collin Kemeny. The contemporary works will be joined by early classical-era compositions by Hadyn, Sor, and Hoffmeister.

Time Canvas rediscovers classical chamber music by exploring three often forgotten genres: early music, new music, and improvisation. The trio’s instrumentation of violin, cello, and guitar lends itself to intimate concerts recalling a time when chamber music was performed predominantly in the living room for friends and family. At the heart of the ensemble is a common desire to create beautiful music and deliver it in a manner in which the audience may engage both the music and their own selves with a fresh, reflective perspective. In contrast to an age filled with busyness and distraction, Time Canvas hopes to encourage the audience to rediscover the value of engaging art in a purposeful manner.

The musicians of Time Canvas find themselves irresistibly drawn to both Renaissance and Baroque music, as well as new contemporary compositions by living composers. They have enjoyed discovering just how similar these two seemingly distant eras really are. One of the many connections bringing early and new music together is the use of improvisation. The three musicians of Time Canvas share a love of spontaneously composed music, and have been performing free improvisation together since founding the ensemble in 2012.

Time Canvas’ musical curiosity has culminated in performances throughout Northeast Ohio, where they reside, in addition to performance spaces across the east coast of the United States and in Bangkok, Thailand. Recent musical adventures include “The Bach Project”, which paired the music of J.S. Bach with free improvisations inspired by the music of today, “North American Voices” featuring the contemporary music of American Composers, a quintet collaboration with world percussionist Anthony Taddeo titled “Explorations in Improvisation”, and a collaboration with a string quartet to create a musical conversation between a Haydn string quartet and improvised music, among others. They also frequently collaborate with Classical Revolution Cleveland. While the ensemble loves performing in traditional concert halls, they are equally comfortable performing for attentive audiences in a wide variety of venues. They have previously been found performing in parks, coffee shops, churches, bars, garages, bookstores, and art galleries.