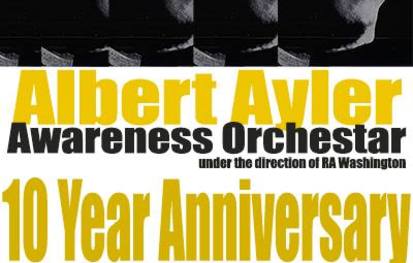 In 2007, a group of Cleveland musicians gathered to put on what was supposed to be a one time celebration of the music and life of Cleveland's own, Albert Ayler. The piece, entitled "Along The Eastern Shore" was premiered as part of Ingenuity Fest and featured Lawrence Daniel Caswell, Daniel Gray Kontar, Dan Wenninger, Chris Kulscar, Bill Nichols, Neil Chastain, Louis Arrocho Jr, Buddy Akita and Lamont "Bim" Thomas.

Director, RA Washington, is delighted to have the opportunity to share this work with the public again on Sunday, March 26th at 7pm. There will be a "pay as you want" donation at the door because the band wants to keep the show affordable to all. Proceeds from the show will help the band record this piece to vinyl.

There is no set ticketing price for this event. The group simply asks you pay what you can!