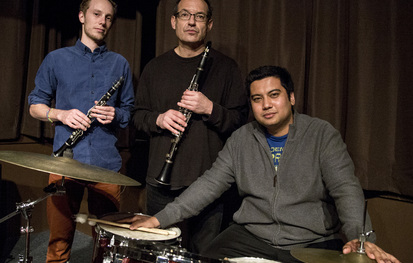 Clarinetist Ben Goldberg, pianist/keyboardist Michael Coleman, and drummer Hamir Atwal came together in the innovative jazz and experimental music world of the San Francisco Bay Area. Eventually they found it necessary to form this trio, which for some reason may or may not be called Invisible Guy.

As a trio, Ben, Michael, and Hamir are in strict pursuit of beautiful melody. Michael Coleman says: “Melody is the knife that cuts through to truth. Then there is the importance of breath, and personal expression.” Reviewing a 2014 concert, Howard Reich of the Chicago Tribune said the group is "an unusually focused ensemble inventing a musical syntax for itself." Invisible Guy's first record, Knuckle Sandwich, is now available.

The Musicians:
From 1992, when his group New Klezmer Trio released Masks and Faces and "kicked open the door for radical experiments with Ashkenazi roots music" (SF Chronicle) to 2013’s simultaneous release of Subatomic Particle Homesick Blues (featuring Joshua Redman) and Unfold Ordinary Mind (featuring Nels Cline), which the New York Times noted for “a feeling of joyous research into the basics of polyphony and collective improvising,” clarinetist and composer Ben Goldberg has shaped a career through relentless pursuit of musical truth across many genres and styles, resulting in the Downbeat Critics’ Poll naming him the #1 Rising Star Clarinetist in both 2011 and 2013. In 2015 Ben released a recording of his songcycle Orphic Machine , sung by Carla Kihlstedt and performed by an allstar
nine piece band including Nels Cline, Greg Cohen, and Ches Smith. The LA Times called Orphic Machine “knotted and occasionally spooky composition marked by dazzling interplay.” All Music Guide says "Orphic Machine is wildly ambitious and sophisticated, but also graceful, emotionally honest, and accessible. It makes the profound embraceable and, as a result, is a masterpiece." Ben currently composes for and leads the following groups:
Unfold Ordinary Mind ; Go Home ; Ben Goldberg School ; and Ben Goldberg Trio with Greg Cohen and Kenny Wollesen.

Drummer/Percussionist Hamir Atwal is a Berklee College of Music graduate who
has taught at Music Academy International, and the Stanford Jazz Workshop. Hamir is an active endorser of DREAM Cymbals. Hamir has played with saxophonists Joe Lovano, Greg Osby, and Grant Stewart; Bassist/Producer Bill Laswell; and clarinetist Ben Goldberg.

Michael Coleman is a pianist, improviser and composer currently residing in Brooklyn, NY. He has had the pleasure of playing with many great musicians and recording with some of his favorite bands and people. Apart from leading his own groups (Beep!, CavityFang, Young Nudist), Michael has toured the world with Chris Cohen, tUnEyArDs,
Sean Hayes, Miles Kurosky and Jug Free America.