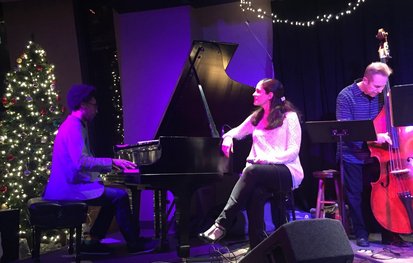 Back by popular demand, Amanda and her friends bring their holiday spice to the stage. These exceptional musicians will dazzle you with nostalgic holiday favorites from around the world. Cozy up to the fire, sing along and experience the spirit of the season.

Amanda Powell, soprano, is praised for her "inspirational and expressive singing" (Classical Candor) and "abundant vocal technique" (ClevelandClassical.com). She enjoys a diverse performance career including classical, folk, jazz and global music. She holds a degree in vocal performance with an opera concentration from Shenandoah Conservatory and a certificate in jazz improvisation from the Jazz in July Institute (University of Massachusetts). Ms. Powell appears often as a soloist with Apollo’s Fire, The Cleveland Baroque Orchestra, appearing as soprano soloist in the Praetorius Christmas Vespers, second lady in Mozart's The Magic Flute, and as lead female vocalist in Jeannette Sorrell's crossover programs "Come to the River" (national tour) and "Sugarloaf Mountain - An Appalachian Gathering," which became a Billboard bestselling CD in 2015. Amanda has sung concerts around the world, including at concert halls in Italy, Spain, France, Mongolia and China.