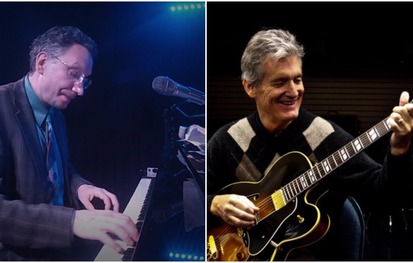 Joe Hunter (piano) and Pete Cavano (guitar) will be teaming up to present a unique evening of music not to be missed. Joe and Pete will be performing a wide variety of genres including straight ahead Bop, Bossa Nova, New Orleans second line grooves, and more. Special guests will make an appearance throughout the evening as well!

We look forward to sharing a night of world class music with you highlighting two of Clevelands favorite artists!

Joe Hunter: Joe Hunter has been playing piano professionally since 1978 and his versatility has garnered him work with an array of artists. He attended Cleveland State University where a 1979 exchange program in Rio De Janeiro fueled his fascination for Brazilian rhythms.He returned to Brazil in 1981 to study at the Universidade Gamma Filho. From 1987 to 1996 he served on the Conservatory of Music faculty at Capital University in Columbus, Ohio, He has performed with many national artists including Conti Condoli, Tito Puente, and Scott Hamilton, and is a favorite at many JazzFest events. Joe has been with the Tri-C Jazz Studies program for several years and is co-host of the popular Song Is You! Series produced by Tri-C JazzFest.