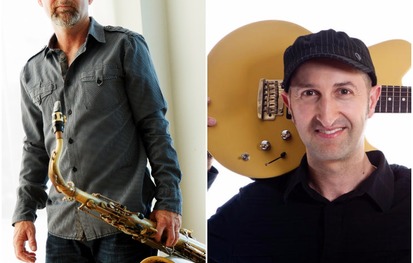 Saxophonist, Pete Mills, and JUNO nominee, Michael Occhipinti, join forces for a Midwest tour that includes a lucky stop at BOP STOP! The music for the tour will include a combination of some of Pete's and Mike's original compositions for this specific ensemble as well as their own bands. Michael and Pete have been friends for many years (both growing up in Toronto) and have had many opportunities to collaborate in a variety of ways.

A native of Toronto Canada, saxophonist and composer Pete Mills’ discography includes 4 solo titles, with his most recent, 2014’s Sweet Shadow. The CD released on Vancouver’s Cellar Live Records has garnered critical acclaim – “A stellar recording”-JazzTimes, “Man, what a gas!”-DownBeat and a 4 ½ star rating from Dan McClenaghen at Allaboutjazz.com. The recording features drummer Matt Wilson (who is also a part of Mills’ disc Art and Architecture), his long time collaborator, guitarist Pete McCann, bassist Martin Wind and pianist Erik Augis. Mills' 2007 release, Fresh Spin on the Summit Records label features B3 organist Tony Monaco and Pete McCann. It received enthusiastic reviews in both DownBeat (3½ Stars) and JazzTimes magazines and was on the Jazz Week top 50-radio chart for 8 weeks. His 2004's release on Summit, Art and Architecture (4 stars All Music Guide), features drummer Matt Wilson, bassist Dennis Irwin and Pete McCann. A top 50 Jazz Week radio release, it also received airplay on the MTV networks. His first solo release was the critically acclaimed, Momentum(COJAZZ Records). As a sideman he appears on over a dozen CDs including those by The Columbus Jazz Orchestra, saxophonist Chad Eby, the eclectic ensemble Madrugada, guitarist Stan Smith, The Cleveland Jazz Orchestra and The Paul Ferguson Jazz Orchestra. As a soloist Mills works throughout the U.S and Canada. In Columbus Ohio he performs as a featured soloist with the Columbus Jazz Orchestra (Byron Stripling Musical Director). Educated at the Eastman School of Music and the University of North Texas, Mills has received Grants from the Canada Council and was a recipient of the North Carolina Arts Council Jazz Composer's Fellowship. In addition to his performing, Mills teaches saxophone, improvisation and directs the jazz ensemble at Denison University in Granville, Ohio.