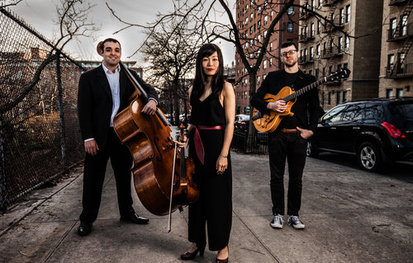 Tomoko Omura's Post Bop Gypsies are a modern take on the classic, violin, guitar and bass instrumentation. The New York City based trio also features Alex Goodman on guitar and George DeLancey on bass. The band is on the road celebrating their self titled 2017 debut release (Inner Circle Music 2017).

Originally from Shizuoka, Japan, Tomoko Omura began studying the violin at a young age with her mother, and began playing jazz music while studying at Yokohama National University. In 2004, Tomoko relocated to the United States when she was awarded a scholarship to study at the Berklee College of Music in Boston, MA. While at Berklee, Tomoko worked with such legendary musicians as George Garzone, Hal Crook, Ed Tomassi, Jamey Haddad, Matt Glaser and Rob Thomas. In 2005, during her sophomore year, she was awarded Berklee's prestigious Roy Haynes award; an award given to one student for their exceptional improvisational skills. Tomoko was the first violinist in Berklee's history to receive this award. She graduated summa cum laude in 2007.

Since moving to NY in 2010, Tomoko has performed with a wide range of musicians including: