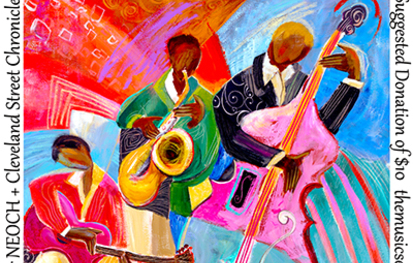 World/Jazz ensemble, Drumplay, has been creating their "rhythmprovisations" for nearly 30 years, starting in February of 1992. Reading like a Who's Who of Cleveland master musicians (some of whom have gone on to achieve greater success outside our city limits), Drumplay continues to make relevant music for the 21st Century while weaving poetry into the mix. The band began as a trio featuring Warren Levert on congas - a relative of Eddie Levert of the O'Jays. Their first album also featured drummer, Joe Tomino, who would later go on to join Matisyahu and form Dub Trio.

Highlights in the band's career began shortly after their formation. In 1996 for Cleveland's Bicentennial celebrations, Drumplay was asked to perform with D'Cuckoo, (electronic percussion group from San Francisco), in a multi-media performance led by Arthur Hull, augmenting D'Cuckoo's synthesized sound. In 2000, the group was chosen to perform at NXNE in Toronto. For their 10th Anniversary concerts in 2002 at Cleveland Public Theater, Drumplay invited street poet and Cleveland-native Hugh Morgan Hill, aka Brother Blue, to open the shows. Dr. Hill was designated Boston's Official Storyteller, and 2009 recipient of the W.E.B. Du Bois Medal.

In 2002, the group's founder, James Onysko, asked marimba player, Benoit Moerlen (Gong + Mike Oldfield Band) to contribute his talents; resulting in a second European tour; and the recording of "Dayshine to Stars-end" in 2003 - completing the trilogy with Daniel Thompson, Cuyahoga County's Poet Laureate, who passed shortly after the album's release in 2004. Drumplay's connection to Gong first began when members of the band were asked to back up Daevid Allen's solo show while that itinerant troubadour was passing through town. It was a rare, one-night-only concert by (what was shouted out from the audience) Cleveland Gong! Drumplay was also named Best World Music Act in 2002 by readers of the Cleveland Free Times.

During their five tours of Europe (thus far!), Drumplay has performed live on national radio in France and Luxembourg (Radio Bleu + RTL, respectively), as well as on pirate radio program Psychedelicatessen in Amsterdam (Radio Patapoe); and on Radio Tonka, broadcasting from De Blauwe Aanslag, a legendary, cultural squat in den Haag. The ensemble was invited three times by Festival International de Musique Universitaire in Belfort, France (2002, 2003, 2012). Their 2004 tour saw them in residence at Kulturfabrik in Esch-Alzette, Luxembourg; and in 2008, Drumplay embarked on what was called their "Bye, Bye, Bush" Tour, going back to their roots as a trio performing at clubs, festivals + schools.

Having released and/or been featured on more than a dozen albums over the years, Drumplay now contributes soundtracks to movies. You can hear the band's music in the independent film, Among The Shadows, starring Lindsay Lohan, now streaming on Amazon; and in the coming Hollywood movie entitled All Terrain, featuring Marshall Bell (Starship Troopers, Total Recall, Stand By Me, Twins). For more information on these movie titles, go to www.imdb.com. The group is preparing a new album to be released later this year.

The Drumplay lineup for the NEOCH benefit on July 7 @ BOP STOP is: