LoveMuffinPalooza: A Benefit For The Gathering Place @ BOP STOP 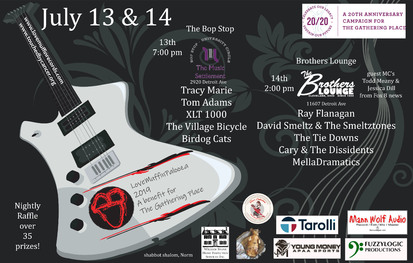 Cleveland based Love Muffin Records holds its 12th LoveMuffinPalooza concert this year. Owner Adam Rich started LoveMuffinPalooza in 2008 for bands he wanted to work with on his label Love Muffin Records. Highly influenced by the old Undercurrents music festival, the concert evolved into a multi-evening event. A raffle was started in 2010 to get some extra income for the bands. In 2011, proceeds from the raffle went to benefit the Cleveland APL. After Adam’s cousin passed from cancer that year, he was determined to find a cancer related charity for future raffles. He came across The Gathering Place, a local cancer support center with locations in Beachwood and Westlake (www.touchedbycancer.org) and has been working with them since 2012. As bands started donating their pay and sponsors were added, the raffle prizes got bigger and better. Last year, the entire event was officially made a fundraiser for The Gathering Place. Over the last 7 years nearly $8000 has been raised.

The raffle will consist of 18 prizes given away throughout the night!

The lineup for the BOP STOP concert on 7/13 includes: