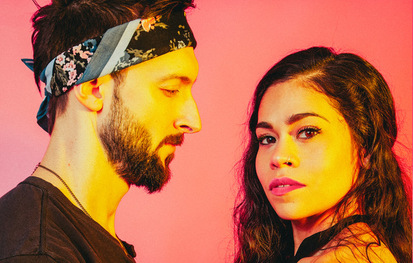 Honey And Blue, a self-described mix of pop, blues and soul, is fronted by singer/songwriters Adam Darling and Stephanie Amber. The duo recently released their second full length ‘All The Feels’. An album that showed listeners they refuse to be defined by any one genre. They have been featured on ABC 6 Good Morning Columbus, Broad and High (PBS), and are fresh off their first east coast tour. The band is thrilled to back home and working on album number 3. In the meantime they are releasing the exciting Sonic Lounge Sessions, and singles to keep listeners engaged.

Born and raised in Ohio, Darling met Amber (a New York native) while working at the same restaurant in Los Angeles. The two were both pursuing a career in music and quickly hit it off, writing together for more than a year before forming their band. After performing all over LA, at sought-after venues like The House of Blues and The Hotel Cafe, the duo moved back to the Midwest to continue work on their first album. Once the duo arrived in Columbus they teamed up with Dwight Bailey and created their self titled first album and the rest is, as they say, history! They have had the pleasure of performing at Jazz and Ribs Festival, Creekside Blues & Jazz Festival, Columbus Arts Festival - opening for Post Modern Jukebox, Pride Festival - closing the festival out after Martha Wash, Brite Winter Fest, and many other exciting festivals.