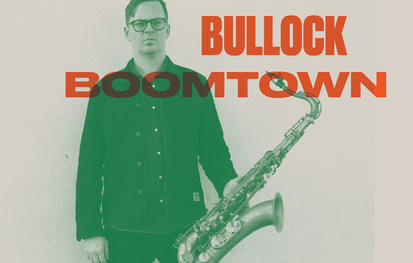 Chris Bullock is a saxophonist, multi-instrumentalist, and composer. The Snarky Puppy member has recently stepped out as a leader with the release of his debut record, Boomtown. This album is a hybrid of sorts. On the album, Chris has explored ways to combine his varied interests in jazz, woodwind chamber music, electronic music, and hip hop production elements.

As a longtime member and composer for Snarky Puppy, he has received three Grammy awards and maintains an active schedule performing for audiences all over the world. Chris resides in Brooklyn, NY where he balances his time leading his solo project, playing live shows with a diverse range of artists, and performing for studio sessions.

Originally from Asheville, NC, Chris’ musical obsession began as a child with early interests in the Beach Boys, hip-hop cassettes, and learning the clarinet and electric guitar. Over time the saxophone became central to his music making.

As a multi-instrumentalist, Chris has performed with a variety of artists including David Crosby, Michael McDonald, Lalah Hathaway, Charlie Hunter, Chris Thile, Eric Harland, Phish, and Soulive. In addition to his work as a live musician, Chris is also an educator and clinician. He received music degrees from East Carolina University, Michigan State University, and studied at the University of North Texas. Chris Bullock plays D’addario reeds, Yamaha Saxophones, and Earthquaker Devices FX pedals.

Opener, Electric Kif, came together creatively from very different backgrounds. Eric Escanes on guitar is from Bordeaux, France, Rodrigo Zambrano on bass is from Mexico City, Jason Matthewson keys proudly hails from Philadelphia, and Armando Lopez on drums from Miami. Their training and experience combined was bound to generate something special…but their energy and dedication has taken Electric Kif to another level. Following a performance at one of the festivals, they looked at each other and knew Electric Kif was their calling. Fast forward to 2016… the band had new recordings under way, started playing outside of Miami, and shifted their focus to launch Electric Kif nationally.

Armed with their latest record,Heist, which was recorded, produced by the quartet in their home studio, and mixed at City Of Progress Studio in North Miami, they are thrilled to release this music with distribution partners La Reserve Records. La Reserve is proud to have partnered with Electric Kif this year. As a new company focused on the music of tomorrow, sourcing and curating the most cutting edge arts from around the world - Electric Kif was a perfect fit with our vision” says Greg Mathews, founder of La Reserve.