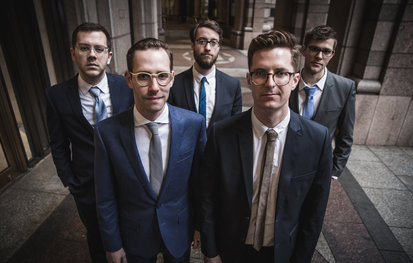 Cowboys & Frenchmen is a new take on instrumentation, composition, and orchestration for the jazz quintet. “The band makes a glorious sound – more like a larger ensemble at times – providing intriguing, innovative and sublime music,” [Mike Gates, UK Vibe]. The front line of two alto saxophones is the vehicle for reimagining the role of horns in a small group setting, charting new territory by exploring individuality within the same timbre.

The New York City-based quintet released its debut album Rodeo in 2015 on Outside In Music, which garnered terrific reviews and enjoyed top placement on radio charts. Their recent 2017 release, Bluer Than You Think, received a four-star review from Downbeat Magazine, and was celebrated with an eight-market tour visiting historic stages including Blues Alley (D.C.) and Cliff Bell’s (Detroit).

Cowboys & Frenchmen was a featured presenter at the 2016 North American Saxophone Alliance Conference, which served as the centerpiece for a performance and educational tour through Texas. They performed at the D.C. Jazz Festival in 2016 as finalists in the inaugural D.C. JazzPrix Competition, and again in 2017 as a featured artist. They were also selected to perform at Umbria Jazz Festival’s 2017 Conad Jazz Contest.

The inspiration for the band name, Cowboys & Frenchmen, is a short film by David Lynch, called “The Cowboy and The Frenchmen.” The film is a Western - but with a unique, out-there interpretation of that classic genre. Similarly, this quintet’s music has one foot firmly planted in a genre, while the other one is busy trying to kick down the genre’s door.