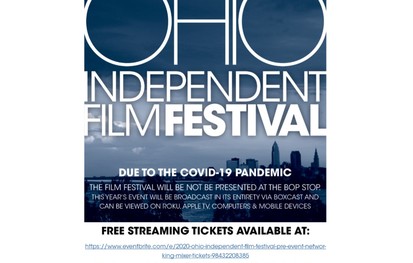 At this year’s Ohio Independent Film Festival, attendees will be treated to some of the best undiscovered independent cinema from around the world. Moviegoers will be able to experience features and short films which will be held on Saturday May 2nd at The Bop Stop.

This year's festival is broken into five program blocks. Tickets for each block are only $5. Check out each block here:

For more Information on the films and to purchase tickets please click the links listed above. BOP STOP bar and kitchen will be open during the festival.

During these dark and odd times what better way to stay indoors then watching the best independent cinema from Ohio through around the world? In order to maintain safety precautions, we will be streaming the entire festival, films, introductions, Q & A's with directors, online for FREE!

Bop Stop WILL NOT be open and streaming is the ONLY option
Here is our 2020 Ohio Independent Film Festival Schedule:
Festival Introductions at 2:00pm

Poisoning Paradise at 4:45pm
Directed by Keely Shaye Brosnan, Executive Producer Pierce Brosnan
Journey to the seemingly idyllic world of Native Hawaiians, whose communities are surrounded by experimental test sites for genetically engineered seed corn and pesticides sprayed upwind of their homes, schools, hospitals, and shorelines. Discover what’s at stake for Hawaii from local activists, scientific experts and healthcare professionals as they expose the effects of environmental injustice on a local population. Join the international debate about pesticides that is raging around the world, as well as the people’s movement to hold corporations and governments accountable for poisoning planet Earth.

Pre-feature Short: School's Out by Antonio Harper
With the holiday upon them 3 teachers and the school secretary gather to see who will take home the holiday bonuses and win the title of the worst teacher.

Poser at 6:30pm
Directed by Jake Striebel
A local skate legend returns from out-of-state rehab to star in a documentary about his recovery only to have the project derailed when a drug stash is uncovered in an old hangout spot.

Pre-feature Short: Antipode by Robin Harper Latkovich
On the way to a mysterious destination, a silent figure braves the dangers of a beautiful but inhospitable polar landscape.

Maximillian at 8:30pm
Directed by Keith Collins II
A secret team of assassins, known as the Shadows, are placed in a battle royale against each other by their Leader, the Watcher. Max and his teams' skills and sanity are put to the test in an ultimate game of survival. Who will be the last man standing?!

Pre-feature Short: On Target by B. R. Tatalovic
A retired Air Force veteran recalls an incident from 1999 NATO's bombing of Yugoslavia and decides to reveal everything he knows, while being videotaped by his daughter - for her student documentary film. "On Target" explores the problem of global wars and the killing of innocent children, from the point of view of someone who participated in it. It's a minimalist psychological drama that aims to expose an ongoing tragedy and its long-term effect on human brain and human race as a whole.