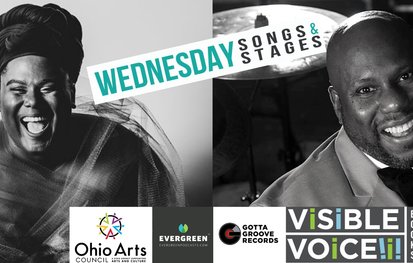 Cleveland Rocks: Past Present Future presents Wednesday Songs & Stages, a live stream concert series supporting 10 Northeast Ohio Music Relief Fund grant recipients and the local venues like The Bop Stop, that have historically provided opportunities for our Cleveland musicians. This event is being generously supported with an @ioby fundraising platform, meaning ALL DONATIONS ARE DOUBLED in support of this event and venue! Donate/Purchase tickets here: https://ioby.org/project/bop-stop-virtually-everywhere

The series has been funded by the Ohio Arts Council and is partially sponsored by Evergreen Podcasts, one of the fastest growing podcast networks in its class. David Allen Moss, CEO of Evergreen shared, "Evergreen has a proud tradition of creating platforms for artists to shine. Our growing creative team boasts a roster of local and nationally known musicians, producers, and writers. We’re thrilled to support Cleveland Rocks: Past Present Future on their innovative music relief program and Wednesday Songs & Stages celebration.’ In addition to Evergreen Podcasts, Gotta Groove Records and Visible Voice have also generously donated at the sponsorship level making these events possible.

Note: Event capacity for audience members is impacted by COVID, which means limited, socially-distanced seating Reservations are limited, while space is available.

Here's a little bit about the featured artists CRPPF has supported with the Northeast Ohio Music Relief Fund and continue to support with its Wednesday Songs and Stages programming:

Kyle Kidd: He creates Black Art, pulling from the many different avenues of black music and culture, vocally fusing classical, jazz, blues, gospel, funk and soul. He is currently performing throughout the country with artists such as Mourning a BLKstar, Algiers, and Richard Kennedy, most recently in "A Touch of Elegance," a commissioned black opera featured in the Great Force exhibit at the Institute of Contemporary Art, VCU. Kyle also works as an educator in the Youth Sing Out program, collaborating with Roots of American Music, The Rock and Roll Hall of Fame, and The Maltz Museum of Jewish Heritage. In his solo division, Kyle composes original music and curates multi-sensory experiences that incorporate stylized video, music, and fashion. He intends for his art in all its forms to be a tribal legacy, centered on representation, raw expression, and true freedom for each of us.

Robert Hubbard, Jr. was born in Cleveland, Ohio to Robert and Virginia Hubbard. At the age of 5, Robert began to play drums in his father's church. He began his preparatory studies at the Cleveland Music Settlement , John Hay High School was later accepted into the Cleveland School of the Arts (CSA) with Frank McComb, Avant, Conya Doss, Jason Champion and Lafayette Carthon II. During his junior and senior years he was recognized at the Tri-C Jazz Fest as the top high school jazz drummer in the state of Ohio. Also in his senior year he was awarded the honor with his trio as second top high school jazz trio in the nation, second only to Roy Hargrove, Dallas Arts Magnet school, by Downbeat magazine. After graduating from CSA, Robert attended Jarvis Christian College in Texas. Robert began his music career playing with local artists throughout Greater Cleveland. His first major tour began in 1993 with R&B group Men At Large, in which he appeared on the Arsenio Hall television show. Later, he toured with the hit production play, "A Good Man is Hard to Find" and “Will A Real Man Please Stand Up.” His touring and performing career also consisted of him playing for artists such as Changing Faces, Gerald Albright, Sean Jones and many more. Additionally he played for gospel artists, Keith Moncrief and The Gospel Family and Walter and Tramaine Hawkins. Robert started his own band, Moments Notice in 1996 who opened up for the late Wayman Tisdale, Roy Ayers, Marion Meadows, Yellow Jackets, Earth Wind & Fire, James Carter and Randy Crawford