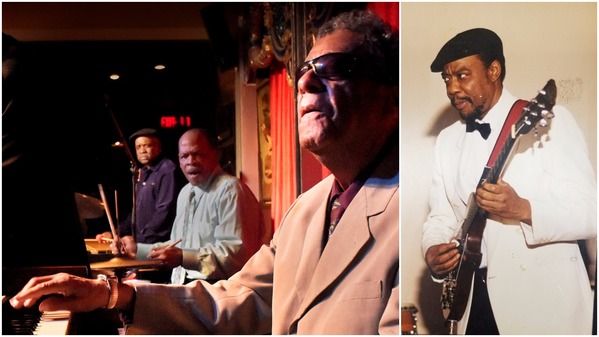 Hammond B3 master Eddie Baccus Sr. returns to BOP STOP with guitarist Billy Artis and vocalist Ron Davis for a classic night of blues, soul, and jazz that will transport you back in time.To watch this show visit the BOP STOP's Facebook page @ 8pm on Saturday November 21st. This event is free but donations are greatly appreciated and can be made here: https://givebutter.com/eddie

In addition to the livestream, we have a very limited number of tickets available for those who want to attend the show in person. Tickets can be purchased below. The BOP STOP bar will be open but the kitchen is closed. Feel free to bring your own food. Masks required. Featuring:

This show will feature the vocal stylings of Ron Davis. Ron Davis was born in Cleveland, Ohio, July 21, 1947. Ronald's parents loved jazz along with his uncle Willie and every Friday night they would listen to records. At an early age Ron heard recordings from Billy Eckstine, Nat Cole, Duke Ellington, Ella, Dinah Washington," By the age of 10, he knew he would eventually be involved in music.Ron Davis has performed with Harold Melvin and The Blue Notes and Clifford Davis. He has worked with the Melting Pot Jazz Orchestra, The Edna Duffy Dance Troupe, the Eddie Baccus Quartet, Gabriel's Horns, closed out the 2015 Cleveland Tri-C Jazz Fest.He is also active fronting his own ensemble and with his own radio show on WKHR 91.5 FM. Davis maintains a long association with the Cleveland TOPS Swingband as a singer and Director of Marketing.

"Davis' huge voice has a wonderful dark resonance, deployed with the savvy experience of age, but with the flexibility that sounds youthful. Davis proved he could move his rich voice with agility in songs like Kansas City, and then let it unfurl in all its glorious sound in Storm Weather." -Mark S. Jordan, Mount Vernon News