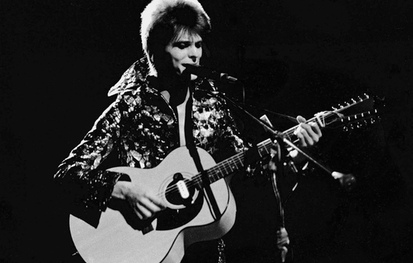 "A Lad Insane: The Beautiful Mind of David Bowie." Livestream event presented by Thomas Mulready with music by Vanity Crash. This event is livestreamed only. There will be no live audience. Information regarding how to access the stream will be posted shortly.

Celebrating the birth (January 8) and death (January 10) anniversaries of David Bowie (for the 5th year in a row at BOP STOP), this special event explores mental health issues that have emerged through the life, career, music and videos of David Bowie. The artist's half-brother, mentor to the young David Jones, was institutionalized and committed suicide, with the relationship and the incident referenced in Bowie's music.

A history of mental illness in his family weighed heavily on Bowie throughout his career, from early songs like "All The Madmen," through explicit references to an asylum in the video for "Ashes To Ashes." The artist's well-known rapid creation and discarding of personas became problematic as he admittedly merged his own personality into his wildly popular characters such as Ziggy Stardust and the Thin White Duke.

We'll explore rare videos and demos, talk with professionals, unearth fresh details of the artist's life, and hear original and Bowie music from Vanity Crash. As the COVID-19 pandemic and subsequent lockdown ravage the world, we'll also touch on how mental health repercussions are emerging, and how one artist dealt with these issues through the unrelenting force of his creativity, invention of personas, and eventual reconciliation.

It scared me that my own sanity was in question at times, but on the other hand I found it fascinating that my family had this streak of insanity... It had tragically afflicted particularly my mother's side of the family... There were far too many suicides for my linking- and that was something I was terribly fearful of. I think it really made itself some kind of weight I felt I was carrying... --David Bowie, 1993

*Above photo by Anastasia Pantsios, Cleveland 1972 US Premiere