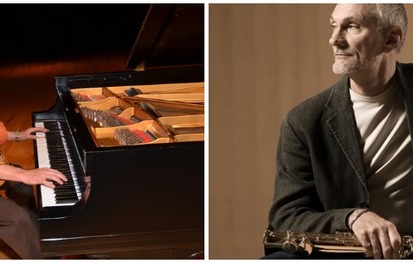 Howie Smith and Chip Stephens have maintained personal and musical contacts since Chip’s studies at CSU, and during the past 14 years they have played together on concerts with Jazz Sextet: the Champaign Connection. This is their first performance as a duo. The two perform a livestreamed concert in front of a limited audience!

To access the stream, visit BOP STOP's Facebook page at showtime. Accessing the stream is free but donations are encouraged and appreciated. They can be made here: https://givebutter.com/HowieAndChip

In addition, we have a very limited number of tables available to attend the show in person. Ticket buyers must purchase an entire table and each table seats up to four guests. The BOP STOP bar will be open and small snacks will be available. Feel free to bring your own food. Masks required.

Howie Smith has presented concerts and workshops throughout the United States, Canada, South America, Europe and Australia, and has worked with musicians, composers and ensembles as varied as Lester Bowie, Anthony Braxton, Dee Dee Bridgewater, Gary Burton, John Cage, Dizzy Gillespie, Mark Dresser, Tony Oxley, Elvis Presley, Pauline Oliveros, the Cleveland Orchestra, the Cleveland Pops Orchestra, and the Tone Road Ramblers. His recorded performances are equally diverse and his catalogue of compositions includes works for conventional big bands and combos; for string, wind and percussion ensembles; for electronics; and for mixed media. Smith is a Professor Emeritus at Cleveland State University, where he was the coordinator of jazz studies from 1979 to 2006 and served as chair of the Art Department from 2003 to 2007. He has been associated with Yamaha as an artist/clinician since 1971.