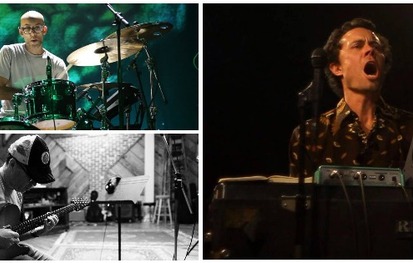 Brian Haas, innovative pianist and composer from groups including Nolatet and Jacob Fred Jazz Odyssey, joins forces with drummer Joe Tomino (Dub Trio, Matisyahu, Togishi) and guitarist Mike Sopko (Bill Laswell, Tyshawn Sorey) for an incredible evening of original music, improvisation, and a couple covers of some more familiar tunes. In addition to performing live, this event will be live streamed on BOP STOP's Facebook page at showtime. Accessing the stream is free but donations are encouraged and can be made at www.givebutter.com/HaasTrio

-------BIOGRAPHIES
A progressive-leaning pianist who straddles the line between jazz, experimental, classical music, and rock, Brian Haas is best known for founding the Jacob Fred Jazz Odyssey. Born in Tulsa in 1974, Haas was a gifted pianist in his youth who earned a full scholarship to the University of Tulsa for classical music. While at Tulsa, he became interested in jazz, eventually switching to full-time jazz study. In 1994, along with several fellow University of Tulsa jazz students, Haas formed the innovative Jacob Fred Jazz Odyssey ensemble, with whom he toured and recorded for several years. In 2005 Haas released his debut solo album, The Truth About Hollywood, on Rykodisc/Hyena Records. Around the same time, Haas formed the band the Dead Kenny G's with saxophonist Skerik and percussionist Mike Dillon. Haas then returned to solo work with his 2009 sophomore album, Petting Sounds. When not performing with the Jacob Fred Jazz Odyssey, Haas continues to collaborate with an array of artists from across the musical spectrum. In 2013 he paired with drummer Matt Chamberlain for the album Frames. Haas and Chamberlain returned with their sophomore collaboration, Prometheus Risen, three years later.