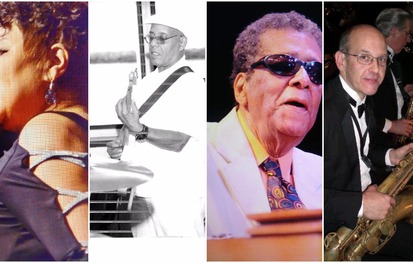 Shirley Cook is a sultry, smoky, and internationally acclaimed jazz singer from Cleveland, Ohio. Ms. Cook has been bringing her improvisational jazz vocals to the Cleveland music scene for over 36 years. She’s been noted by the Plain Dealer as having a “deep alto voice reminiscent of the late Carmen McRae.” Also, by the Call & Post for being a “dynamic jazz vocalist who has her own style with ballads and tempos.” Ms. Cook’s captivating and highly interactive performances have a way of making you feel like she’s singing to you and only you. Through her music, Ms. Cook shares her personal experiences in hopes people will be able to connect and see themselves within her music.

Over the course of her career, Ms. Cook has derived numerous aspects of her style from her early roots in the gospel church. Born in Stotesbury, West Virginia, Ms. Cook moved to Cleveland at the age of two. At the age of eleven, she began singing in a gospel music group alongside some of her aunts. They performed for numerous church and social functions throughout the city. Throughout her early life, Ms. Cook continued to sing with her aunts and through the help of a friend, was introduced to the inspirational music of the late Billie Holiday, Etta James, Abbey Lincoln, and many more.

Along with her work on the stage, Ms. Cook has devoted many years of her life to the care and nurturance of the Cleveland jazz scene. She has helped to organize the annual Tri-C Jazz Fest on multiple occasions. When asked to organize the event, Ms. Cook rounded up 72 local musicians in a span of two weeks. Ms. Cook has an astounding record within the community and unceasingly projects her love for jazz in everything she does. Ms. Cook currently resides in the Cleveland area and continues to showcase her charismatic spirit through her performances.