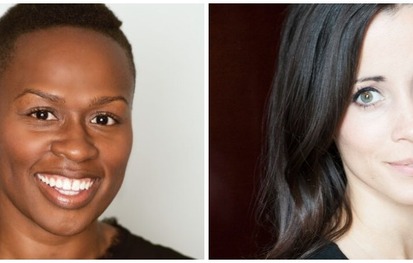 Storytelling, Two Ways: Two women. Two friends. Two storytellers. Natalie Green and Nicole Sumlin present an evening of music from Broadway to pop, celebrating the art of storytelling. These two featured performers will be backed by a stellar band including Joey Skoch on piano, Tim Keo on bass, Justin Hart on drums, and special guest Eugene Sumlin. This concert will be livestreamed in front of a limited, live audience.

This event will be streamed on BOP STOP's Facebook page at showtime. Accessing the stream is free but donations to the band and the venue are appreciated and can be made here: https://givebutter.com/storytelling

In addition, we have a very limited number of tables available for those who want to attend the show in person. Ticket buyers must purchase an entire table and each table seats up to four guests. Tables can be purchased below. The BOP STOP bar will be open but the kitchen is closed. Feel free to bring your own food. Masks required.

Nicole Sumlin is an actor, singer, director, writer, producer, and educator. She currently serves as Education Director at Cleveland Public Theatre. She also served as Vocal Music Director for choral ensembles, Musical Director and Assistant Director for theatre productions, and ELA educator for thirteen years in Wheaton, IL, Mansfield, Ohio, and South Euclid, Ohio. In 2014, she was named Educator of the Year by the Ohio PTA Board’s 11th District. In 2016, she shifted her focus to performing arts instruction and clinician work with area choruses and theatre ensembles (including the Dazzle Awards at Playhouse Square, Cleveland Metropolitan School District’s All-City Musical, and Shining Star CLE) while continuing to perform in Cleveland and New York City. She recently served as Academy and Curriculum Manager at Cleveland Play House, where her responsibilities included managing its Theatre Academy and Summer Academy, as well as crafting and implementing professional development and audience engagement programs.

In 2019, she was awarded Best Actress in a Musical by the Cleveland Critics Circle for her performance as Billie Holiday in Lady Day at Emerson’s Bar and Grille at Beck Center for the Performing Arts. She has also been seen at The Fine Arts Association, Orchard Arts Project, Near West Theatre, Mercury Theatre Company, MOCA-CLE, Nighttown, and Severance Hall. She is a graduate of Wheaton College (IL) and studied voice at Wheaton College Conservatory of Music. She is a proud AEA member.

Natalie Green is a graduate of Point Park University’s Conservatory of Performing Arts. Regionally, she has worked with Dobama Theatre, Cleveland Play House, Pittsburgh Repertory Company, Mamai Theatre Company, Beck Center for the Arts, Cleveland JCC/Tri-C East, EJ Thomas Hall/University of Akron, Lakeland Theatre, Fairmount Center, Cleveland Public Theatre Fine Arts Association, Carnation City Players, True North Cultural Arts Center, and has performed as lead singer for a number of local and regional bands. Professionally, works as a voice-over artist, singer, actor, writer and producer and is proud to be part of the great artistic work that is happening in the Northeast Ohio area and beyond.