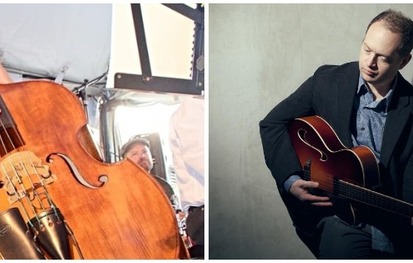 Bassist, Chris Vance, joins forces with guitarist, Bobby Ferrazza, for an intimate duo concert and livestream in which the two will perform a mix of their favorite jazz standards and arrangements.

This event will be streamed on BOP STOP's Facebook page at showtime. Accessing the stream is free but donations to the band and the venue are appreciated and can be made here: https://givebutter.com/ChrisVance

In addition, we have a very limited number of tables available for those who want to attend the show in person. Ticket buyers must purchase an entire table and each table seats up to four guests. The BOP STOP bar will be open but the kitchen is closed. Feel free to bring your own food. Masks required.

Chris Vance has been a consistent performer in both classical and jazz, rock, and world music realms throughout his career. In addition to an active freelance schedule locally, Mr. Vance recently has performed with The Oblivion Project, Nicole Henry, Dominick Farinacci, Sam Morrison (Miles 'On The Corner'), Abdou Mboup (Paul Simon, Jean Luc-Ponty), Mike Clark w/Jeff Berlin, and Bobby Rydell ('Volare'). Chris has also led groups that have opened for Joey DeFrancesco, Ray Brown, and Harry Connick Jr. as well as toured Europe with Kassaba in 2007.

He has been the featured soloist on some of the most demanding classical repertoire and has served as Principal Bass of the Bermuda Symphony as well as the Buffalo Opera Company Orchestra. He has served as a substitute player for The Buffalo Philharmonic, The Akron Symphony, The Canton Symphony & The Erie Philharmonic. Currently the bassist for The Cleveland Winds.

Bobby Ferrazza was born in Cleveland and began studying guitar at 15, after developing a passion for music from listening to rock and the popular music of the time. Ferrazza branched out into many diverse forms of music, including classical, blues, ragtime, and bluegrass.