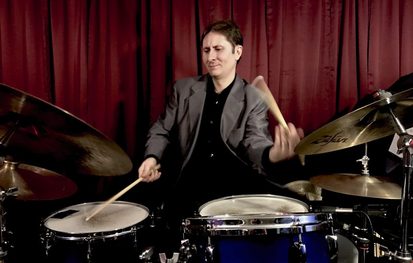 Ricky Exton brings his quartet to the BOP STOP for an evening of standards, originals, ballads and blues. Featuring:

We have a very limited number of tables available to attend the show in person. Ticket buyers must purchase an entire table and each table seats up to four guests. Tables can be purchased below. The BOP STOP bar will be open but the kitchen is closed. Feel free to bring your own food. Masks required.

This event will also be streamed on BOP STOP's Facebook page at showtime. Accessing the stream is free but donations to the band and the venue are appreciated and can be made here: https://givebutter.com/Exton

Ricky Exton was born in Cleveland, Ohio on November 8, 1977. At the age of 5, he took notice of his brothers interest in music and had a chance to see his first concert. This concert was the first step in the direction of music.

By the age of 8, he became interested in the drums along with his brother. So they both started to take drum lessons within the Jazz style. The lessons seemedto be quite confusing and Ricky eventually gave up on those lessons. However, he was beginning to broaden his horizons with new music, which was played on the radio. Now, even though Ricky stopped the drum lessons, he continued to practice on his father’s drumset. At the same time, he discovered his natural singing ability. By the age of twelve, after playing drums and singing in the school band and choir for a few years, he went to see a band of musicians that were friends of the family. The guys in the band had heard that he could sing, so they asked him up on stage to sing a tune with the them. Afterward, they were quite amazed. A few weeks later, Ricky got his first phone call for a recording session.

Although Exton realized his vocal ability, he decided to direct his effort to his true passion, the drums. After about 6 years of studying with drum instructor, Bob McKee, by the end of high school he received a scholarship for a two-year Jazz studies program as a drum principal at Cuyahoga Community College (Tri-C) in Cleveland, Ohio. During his first year of college he performed with a Classic-Rock/Blues band outside of school which lasted a short time. Also while attending Tri-C, among the many great musicians Ricky has been introduced to and has performed with, was Jazz drumming legend Louie Bellson. In a photo of the two, Louie Bellson dedicated the picture saying “To Ricky, a wonderful artist!”

After attending Tri-C’s Jazz Studies program, Exton continued his career at the Berklee College of Music in Boston, Mass., where he earned a Baccalaureate in Professional Music. In the Winter of 2003, he joined the Cleveland based Hard Rock band HYDRA which lasted about a year. Hydra opened for national and international bands like Soil, Living Colour, Collective Soul, and Nightwish.