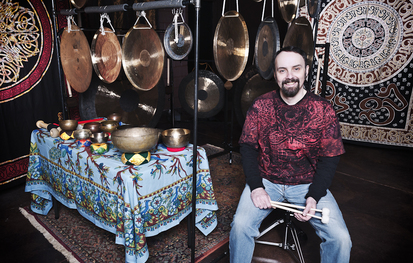 Percussionist Paul Stranahan uses ancient instruments -gongs and Tibetan singing bowls- to make music that is completely modern and original. He creates sounds and moods that can range from soothing and meditative to chaotic and downright apocalyptic. Each performance is improvised and thus each show is totally unique. By using various sticks and mallets, including a special striker to gentle rub the rim of the bowls, Paul fills the room with sounds and vibrations that can only be described as “other worldly“. The record label Infinite Number of Sounds has released a double CD by Paul called “Gong and Singing Bowl Improvisations.”

Night Terrors performs like a dream gone awry. Because of the background of musicians Tim Mirth and Paul Stranahan so much music is possible with each passing second. Experimental textures are created with the use of many electronic pedals on the guitar from hauntedly quiet and round to jagged pulsing squeals. The percussion ranges from the harsh sounds of china cymbals to meditative singing bowls to any form of drumming. And then there are the gongs, the marvelous gongs of multiple sizes that can take the listener to a world far more ancient and yet newly rediscovered. A whole host of sounds and feels are possible.

Tim Mirth is an Akron, OH musician with a love for everything from jazz to the darkest death metal to the sweet sounds of singer songwriters. Tim began his musical journey at 10 years of age after moving to a new town with no friends. After sneaking up in the attic to play his father’s guitar he instantly became obsessed with the strung instrument and gave up any attempt at other pursuits. Tim has performed extensively in the North East Ohio area along with gigs in NYC, Chicago, Germany and France.