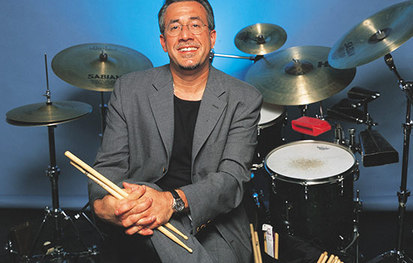 Bobby, the son of Puerto Rican parents, was born and raised in the "Fort Apache" section of New York City's South Bronx. Inspired and encouraged by maestro Tito Puente, another fellow New York-born Puerto Rican, Bobby "got serious" and attended Boston's Berklee College of Music from 1975 to 1979, obtaining a Bachelor of Music degree and receiving their prestigious Faculty Association Award for his work as an instrumentalist. Since his graduation, Bobby has become a leader in the Afro-Cuban, Brazilian and jazz fields as both a drummer and percussionist, and is recognized as one of the most articulate musician-scholars of la tradición living today.

He has been featured on numerous Grammy-nominated albums, including The Mambo Kings and other movie soundtracks, as well as numerous television and radio work. Mr. Sanabria was the drummer with the legendary "Father of the Afro-Cuban Jazz movement," Mario Bauzá's Afro-Cuban Jazz Orchestra. With them he recorded three CD's (two of which were Grammy-nominated) which are considered to be definitive works of the Afro-Cuban big-band jazz tradition. Mr. Sanabria was also featured with the orchestra in two PBS documentaries about Bauzá and also appeared on the Bill Cosby show performing with the orchestra. He also appeared and performed prominently in a PBS documentary on the life of Mongo Santamaria and on camera in the CBS television movie, Rivkin: Bounty Hunter.

In 1993 Bobby and his nonet Ascensión released ¡NYC Aché, on the Flying Fish label (now available on Concord Records). It received worldwide acclaim and garnered four and half stars in Down Beat magazine, as well as receiving a nomination for Best Record of the Year by the National Association of Independent Record Distributors (NAIRD). In June 2000 Bobby released Afro-Cuban Dream... Live & In Clave!!! on the Arabesque label. Recorded live at Birdland in New York City, it features Bobby powering a big band of twenty all-stars. Critically acclaimed worldwide, it has been hailed by both the jazz and Latin music cognoscenti as a masterpiece, and was nominated for a mainstream Grammy as the Best Latin Jazz Album of 2001. Afro-Cuban Dream...Live & In Clave!!! was also nominated for the Jazz Journalists Association 2001 Award for the Best Afro-Cuban Jazz Album of the Year.

His next recording, ¡Quarteto Aché!, released in 2002, on the ZOHO label, documented Bobby's virtuosity in a small group setting and was hailed a "classic" by Modern Drummer magazine and critically acclaimed by the New York Times. It was also nominated for Best Latin Jazz recording of 2003 by the Jazz Journalists Association. He also received a second Grammy nomination in 2003 for, 50 Years of Mambo - A Tribute to Damaso Perez Prado.

Bobby and his Quarteto Aché toured Armenia in June of 2007 being personally invited by the President of Armenia and the U.S. Embassy to represent the United States in a series of concerts. Headlining in the final event, The Cascade Jazz festival in Yerevan, Armenia's capitol, the group received a thunderous ovation from the estimated 8,000 person audience which was broadcast throughout the country. His group has the unique distinction and honor of being the first ensemble ever to perform Latino oriented jazz in this country and spread clave consciousness in a unique master class that he held at the Yerevan Conservatory.

Bobby's second big band CD, Big Band Urban Folktales, on the Jazzheads label, was nominated for a mainstream Grammy in 2008 for best Latin Jazz recording, his third nomination. It has proved to be his most lauded work and garnered critical acclaim for its futuristic approach to the Latin jazz big band canon. Big Band Urban Folktales also won the 2008 Jazz Journalists Award for Best Latin Jazz Recording of 2008.

Bobby has been the recipient of many awards, including an NEA grant as a jazz performer, various Meet the Composer awards, two INTAR Off-Broadway Composer awards, and on several occasions the Mid-Atlantic Foundation Arts Connect Grant. In 2003 he was presented with the "Outstanding Lifetime Achievement Award" by Ivan Acosta of Latin Jazz USA, in recognition of Bobby's extraordinary creative contributions to Latin jazz. Bobby was voted "Percussionist of the Year" for 2005 by the readers of DRUM! Magazine, a worldwide publication devoted to drums and percussion. His three part video instructional series, "Getting Started on Congas," originally released by DCI way back in 1995, now available through Alfred Music, set an industry standard by which all other instructional percussion videos must be judged by.

In 2006 Mr. Sanabria was inducted into the Bronx Walk of Fame having a permanent street named after him on the Bronx's famed Grand Concourse in recognition for his contributions to music and the arts. Mr. Sanabria has been awarded the 2008 Lifetime Achievement Award by KOSA for his outstanding accomplishments in jazz and Latin music both as a performer and educator and the 2008 Martin Luther King Jr. Mentor Award presented to him by the Manhattan Country School for his work in the world of jazz. In 2011 the Jazz Journalist Association named him Percussionist of the Year.

As an activist he has long been a champion for the recognition of Latin jazz as a legitimate art form and its proper place of recognition in the history of the jazz continuum. In 2006 he spearheaded the campaign to restore the Latin Jazz Cruise, a weekly 2 hour radio program on Jazz 88 WBGO FM, Newark, NJ after it was suddenly taken off the air without an explanation. Organizing politicians like New York Congressman José Serrano and Congresswoman Nydia Velazquez as well as fellow musicians and fans of the music, the show was successfully brought back on the air. The result has been that the station has also made Latin jazz an integral part of all of its regular day to day programming, thus expanding the audience for the genre as well as jazz in general. In April, 2011 when NARAS, the governing body of the Grammys summarily cut 31 categories, including Latin jazz, from the awards process with no rhyme of reason or any input from the 21,000 membership, Mr. Sanabria spearheaded a campaign uniting well known musicians from both the west and east coasts. It also included the general public and internationally known personalities like Paul Simon, Bonnie Raitte, Herbie Hancock, Carlos Santana, Jessie Jackson, Dr. Cornell West as well as national Latino organizations like Presente, National Institute of Latino Policy, National Hispanic Media Coalition, National Hispanic Foundation for the Arts, several unions and others against this injustice. A subsequent law suit filed by Mr. Sanabria and fellow plaintiffs Eugene Marlow, Ben Lapidus and Mark Levine in New York State Supreme Court finally pressured NARAS into reinstating the category this year. For his role as an activist and his efforts in restoring the category to the Grammys Bobby has received the BORIMIX Award from the Society of the Educational Arts and the prestigious Puerto Rican Heritage Award from Comite Noviembre, the leading Puerto Rican organization in the country.

His current new big band CD released in August of 2012 on the Jazzheads label is entitled MULTIVERSE. Inspired by the writings of Mexican author Octavio Paz and the current scientific theories of multiple universes, it blurs the boundaries between jazz, Latin, funk, rock, r & b, gospel, the avant garde and even rap. Featured are spoken word artist La Bruja in an amazing first ever fusion of spoken word/rap big band Latin jazz tribute to the Father of Afro-Cuban jazz Mario Bauzá and award winning vocalist Chareneè Wade in an incredible new treatment of Over The Rainbow. MULTIVERSE has been praised by critics for its incredible multi-dimensional vision bringing the big band into and beyond the 21st century. It has been recently nominated in two categories for the Grammys: Best Latin Jazz Recording and Best Instrumental Arrangement - Afro-Cuban Jazz Suite for Ellington, giving Bobby a total of seven nominations for the coveted award.