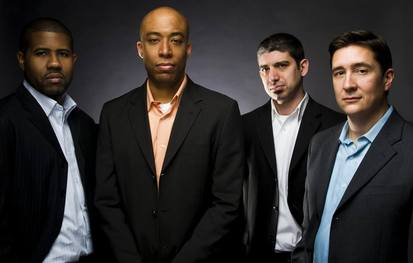 Saxophonist Chris Greene knows that everything he experiences can become a resource. His musical appetites are voracious, and that comes across through his performances and recordings, especially the expansive two-disc set, Music Appreciation. But the roots of Greene’s singular blend of jazz improvisational skills, heavy funk beats and pop music concision go back to his teenage years hearing his parents’ records and watching t.v. in Evanston, Ill.

“I’m 40 now, but I was super into Michael Jackson and Prince when I was growing up,” Greene said. “While I was waiting for ‘Beat It’ or ‘Little Red Corvette’ to come on, there was a wealth of stuff that I was exposed to through MTV: Billy Idol, Van Halen, Billy Joel, all this other stuff I never really heard of. So as much as I want to be Joe Jazz Visionary and push the art form forward, at the same time, I still utilize elements of music I heard growing up. It’s all a part of my musical genetic makeup. And the stuff that led up to that when I was watching MTV: all that was funk and soul. My mother blasted Motown at her monthly card parties and my dad was into funk, soul and disco, so I heard all that around the house.”

At the same time, Greene’s longstanding quartet has made these instantly enjoyable melodic sources vehicles for sophisticated musical ideas of its own. The group has been together since 2005 (current drummer Steve Corley joined in 2011) and has released eight CDs. They have also been performing on bigger stages recently, including packed houses at Chicago’s Green Mill. Greene has been in frequent contact with Brazilian soul star Ed Motta, who enjoyed the quartet’s version of his “Papuera.” And the bandleader knows that mixing an open-minded attitude with judicious decisions creates a wide appeal.

“I played a show last year and got three different compliments,” Greene said. “One guy who recorded the show thought we were too ‘out,’ which I thought was funny. Another guy thought we were too traditional. Another lady said it was cool, but said she didn’t know we played smooth jazz. Three different people whose opinions I respect, but at the same time, they heard completely different bands. I do like some smooth stuff, some stuff from the ’70s—Creed Taylor stuff—and a lot of freer stuff. One thing that has changed is when A Group Effort came out in 2012, I was known as, ‘The jazz-funk guy.’ A guy who plays jazz, but really likes funk, Prince or whatever. When you say somebody plays jazz, obviously that can mean anything: Louis Armstrong, Albert Ayler or Kenny G. Funk is a whole different can of worms. Are we talking about James Brown, Sly Stone or Cameo? Zapp or Prince? Like Indian food, some will have a little curry, some will have more, but if you just dump it all in at once the whole time, it’s going to be terrible. There are nuances and subtleties to what we’re trying to do - mixing and matching. The hybrid concept is intentional but the performance aspect to what we do makes every concert different than the previous one.”

Greene began earnestly studying the saxophone while he was in high school when he says he repeatedly, “played the hell out of a blues pentatonic scale.” After studying music theory as a teenager, he attended the Indiana University where he studied with current jazz studies department chair Thomas Walsh. After three years, he returned to the Chicago area and started playing professionally in 1994. He also made another change: While Greene had concentrated on alto in the past, in Chicago he started to emphasize the tenor. Today, he sounds equally dynamic on both the tenor and soprano saxophones. A wide range of musicians have known this for years. His work as a sideman has included gigs with The Temptations and Sheena Easton to gigs with such hometown heroes as Andrew Bird and The J. Davis Trio. He formed New Perspective in the mid-1990s and released two discs (On The Verge in 1998 and Jazz six years later), but his longstanding quartet with pianist Damian Espinosa, bassist Marc Piane and drummer Steve Corley exemplifies his vision.

“We’re comfortable with each other in a lot of ways,” Greene said. “Damian, Marc and I have played together for a while, and Steve can be straight-ahead jazz or rock in one song and then do something in a different space and it’s not even a thing for him to shift like that. Whether it’s 4/4 or ‘Firecracker’ in 15/8, he’s right there. Like if Jack DeJohnnette and Questlove had a baby that pushed a set of drums down the stairs. If we make a mistake, we can fix it and reconfigure it in real time and make it sound like it was meant to be there. The energy and creativity that Steve brings in gets fused with Marc’s impeccable time. Onstage, Damian is not afraid to play in a way that changes my musical idea. He makes you think. In a weird way, kind of like a dialogue or conversation. I’ll say some point and he’ll say, ‘I agree with you’ and expound, or he’ll say, ‘You’re full of sh*t.’ And I’ll say, ‘No, and here’s why.’ I’ve played with Marc since 1996; we played together in a jazz/prog-rock band that played in a lot of the rock rooms. I knew at some point when I started the band, I wanted a bass player like Marc: a combination of Ray Brown and Paul Chambers, but he also can be exploratory like Jimmy Garrison. And he also can sit on a simple groove and make it interesting. We’ve recently added some stuff where he’s playing electric, too.”

Not surprisingly, Greene’s quartet’s compositions and their performances blend the relaxed vibe of Martin Denny, spiritualized funk of Charles Mingus and expansive forays of Wayne Shorter and John Coltrane. All of these predecessors are also interpreted on Music Appreciation, and Greene sees himself following more than one of Coltrane’s examples.


“People forget that in addition to being this forward-thinking giant who practiced for 10 hours a day, John Coltrane was also researching philosophy, and in his early days, he played in R&B bands. People also forget about his religious upbringing - he came up in a church-going family. The whole sum total of his musical experience is more than just a bunch of hip chord changes on ‘Giant Steps’ or ‘Countdown’ and a bunch of modal and free stuff. He was constantly studying music and investigating other cultural stuff and his own religious background. What I’m doing isn’t on par with what he’s doing, but my approach is very similar. He investigated his influences and different things. I’m trying to discover what I like and other stuff that I can use musically.”

“4 and a 1/2 stars. The wide-ranging album makes a case for Greene to be known on a wider scale.” - DownBeat Magazine

“...the disc works well as a concept album in the mode of Songs in the Key of Life, in which each track does not tell a continuous narrative so much as offer a new slice of a musical experience.” - Chicago Jazz Magazine

“...ingenuity, raw talent and exquisitely polished style. Music Appreciation is his most accomplished work to date and serves both as a splendid introduction to his oeuvre and as a gratifying addition to it.” All About Jazz