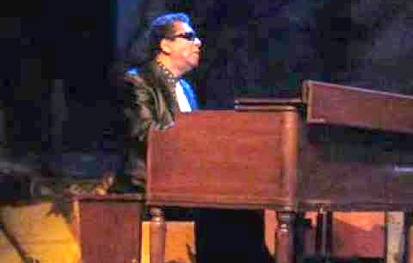 Eddie Baccus Sr. is a blind organist born in Lawndale, North Carolina, who attended the Ohio School of the Blind in Columbus, Ohio, where he studied the piano.

He regularly performed with the saxophonist Roland Kirk, who was one of his schoolmates, and after moving to Cleveland, Ohio, in 1959 he heard Jimmy Smith and switched his concentration from the piano to the organ. This found him becoming hugely influential in the local jazz scene. In 1962 he recorded his only solo album “Feel Real” on Smash Records.

In the late 1960s he married Dolores and their son Eddie Jr. was born in 1970. Eddie Jr. went on to become an acclaimed saxophonist and performs with the group Pieces of a Dream.

He became a virtuoso of the Hammond B-3 organ and now performs on stage with his own Eddie Baccus Sr. Quartet and Quintet and on occasion with the accompaniment of his son Eddie Baccus Jr.

He has performed at Cleveland’s acclaimed Karamu House, many jazz clubs and festivals such as Cleveland’s Tri-C Jazzfest, where he appeared with the organist Tony Monaco, and accompanied numerous artists such as Gabriel’s Horns, Cecil Rucker and his group the Good Vibes and JazzZeejazz in a tribute to Billie Holliday.