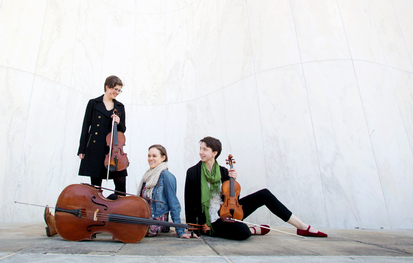 Together since 2011 but dispersed across the U.S. since 2013, Chartreuse has made touring an essential part of its identity. The first of many excursions was to Norway in January 2013, supported by a Kickstarter campaign and a CIGSIE grant from Oberlin Conservatory. Presenting concerts at the Norges Musikkhøgskole in Oslo, Hamar's Toneheim Folkehøgskole, and the University in Tromsø, Chartreuse established fruitful relationships with composers Martin Rane Bauck and Tyler Futrell (whose upcoming trio they will premiere in 2016), as well as appearing on Monzta's debut album 1:A.

Chartreuse’s most recent tour of 2015 was a PLUS/MINUS extravaganza in keeping with the Oberlin tradition of ambitious January projects. Welcoming three additional musicians for every combination between solo and sextet, the trio traveled to Oberlin, Cleveland, Chicago, and New York City. The tour’s seven stops included a featured performance at Oberlin Conservatory’s Winter Term Chamber Music Intensive and appearances at well-known new music venues including Chicago’s Constellation and New York’s Spectrum and Firehouse Space. Among thirteen works in total were premieres by Kurt Isaacson, Katherine Young, Ryan Pratt, David Bird, Peter Kramer, and Theophilus Chandler. Cleveland Classical described the trio’s performance of Isaacson’s work as “a maelstrom almost tactile in its grittiness.”

Like the unusual, elegant liqueur with which Chartreuse shares its name, the trio’s flavor comes from the wide-ranging natural influences of the musicians and composers they work with and are inspired by. As members of deturtle, guided by mentors Jamey Haddad and Jay Ashby, Chartreuse explored world music and jazz with bandmates Matt Gold (guitar), Nathan Friedman (drums) and Matt Adomeit (bass). The trio collaborated with Oberlin Dance Company as members of Oberlin’s Contemporary Music Ensemble and performed as dancers themselves in a choreographed version of Steve Reich’s Eight Lines. The group’s next project, The Water Cycle, will bring the world of environmental science into conversation with a set of pieces parallelling water’s journey between earth and air. As Mike Telin wrote in Cleveland Classical, “They are committed to the cause of new music, and they know how to convey that commitment through their playing.” The trio’s dedication to sharing its “mercurial, alien, volatile music” with audiences throughout the world will only grow stronger with age.