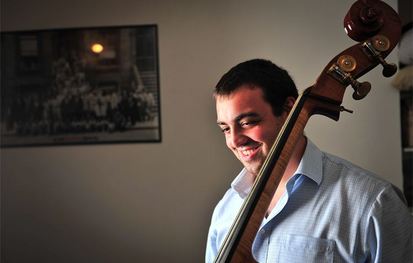 Possessing a powerful sound, an authoritative beat, and an intense, unrelenting swing, George DeLancey is known as a formidable musician, from his hometown of Cambridge, OH to the New York City jazz circuit, and to audiences around the country. He is active as a bandleader and composer, and has appeared as a sideman with noted jazz musicians Wessell “Warmdaddy” Anderson, Christian Howes, Johnny O’Neal, Winard Harper, Philip Harper, Tia Fuller, and the Jazz at Lincoln Center All Stars. He has performed for and taught students around with the country as a bandleader, as well as with programs such as JALC’s Jazz for Young People and Christian Howes’ Creative Strings Workshop.

George began studying bass with Dr. Jacque Gray of Muskingum College, and later with Dr. Mark Morton of the Columbus Symphony. He is a 2007 graduate of Cambridge High School, and a past member of the Columbus Youth Jazz Orchestra under director Todd Stoll. He received many accolades and scholarships as a student, and continued his studies under Rodney Whitaker, Distinguished Professor and director of the esteemed Jazz Studies Program at Michigan State University. He has resided in New York City since 2011.