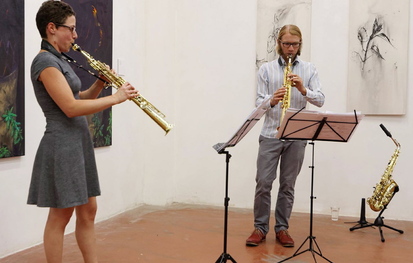 We have two great duo's programmed for this concert!

www.hascoduo.com
Jesse Langen (guitar) and Amanda DeBoer Bartlett (soprano) started working together as a duo in 2013. In just over two years, they’ve developed a seamless program of virtuosic chamber music and free improvisation with an equal balance of chaotic soundscapes and sentimental storytelling. Their Bop Stop set features new music by Jonn Sokol, Morgan Krauss, Ray Evanoff, Max Grafe, and Langen/DeBoer. Amanda DeBoer Bartlett is an experimental singer based in Omaha, Nebraska. She is a member of Ensemble Dal Niente, and is a co-founder of Quince Contemporary Vocal Ensemble. She also organizes an experimental performance festival called Omaha Under the Radar. An avid player of new music, Jesse Langen has premiered dozens of pieces, many of which were written for him. He can be heard as a soloist, in chamber collaborations, and with Ensemble Dal Niente.

ognisuono.com
Formed by saxophonists Noa Even and Phil Pierick in 2009, Ogni Suono is committed to expanding and promoting the repertoire for saxophone duo by performing new works. They have performed in Southeast Asia, the Middle East, across Europe, and throughout North America. Emphasizing the importance of education, Ogni Suono’s performances are regularly accompanied by master classes, clinics, and community outreach programs. Their debut album, Invisible Seams, was released in 2014 and features new music commissioned by the ensemble. Noa lives in Cleveland and teaches at Kent State University. She is active as a soloist and with her saxophone and drum set duo, Patchwork. Phil recently spent a year in Vienna as a Fulbright Scholar and is working toward his doctorate at the Eastman School of Music. Their program features U.S.-based composers Ryan Carter, Hong-Da Chin, Alex Mincek, Quinn Collins, James Bunch, and Ian Dicke.