Three for All @ BOP STOP 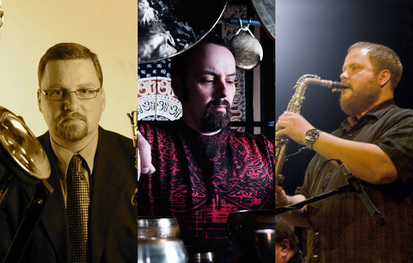 Three for All @ BOP STOP

Three for All is a new collaborative trio which looks to create music that balances intricate pre-composed material with the “instant composition” that we know as improvisation. The group's configuration is singular in that there is no chordal instrument (piano, guitar, etc.) and no pitched bass instrument to outline a traditional harmonic foundation. Indeed, many first-time listeners are struck by the richness of layered sound and implied harmony that can be achieved by tuned drums, gongs, cymbals, and the “singing bowls” that are often used in the service of meditation and healing. Once the twin saxophones are added, the cumulative effect could truly be described as being more than the sum of its parts.

Steve Zombory and John Perrine both play saxophones, and percussionist Paul Stranahan (who has also composed all of the trio's repertoire) plays a mix of drums, gongs and Tibetan singing bowls. Paul says "Writing for this group has been a challenge as well as a lot of fun. I want to compose music specifically for this unique instrumentation and these musicians but at the same time be careful to not over write. I want to provide a foundation that allows spontaneous free form improvisation in which everyone can express themselves individually as well as having an interesting dialogue going on with all three musicians."

As a recording artist, he has done studio sessions in a wide range of styles, including work for American Greetings eCards. Mr. Zombory has also performed on saxophone, clarinet, and flute in dozens of area shows, including work with Great Lakes Theater, The Beck Center, Hiram University, The Laurel School, and the Cleveland Cabaret Project at Playhouse Square. He is also a dedicated music educator with over 15 years of teaching experience ranging in variety from grade-school starter lessons to presentations before university-level master classes.

John Perrine, Saxophone, is Director of the Jazz Ensemble and Coordinator of Jazz Studies. He has premiered works by Kari Juusela, Aaron Johnson and William Price. Perrine holds a doctorate from Louisiana State University , a masters from Northwestern University , and a BME from Stetson University . His teachers include James Bishop, Fred Hemke, Jonathon Helton and Griffin Campbell. He has studied jazz with Harold Blanchard, Don Owens, Tony Garcia and Michael Koucour.

Recently, Perrine has performed the Bolcom Concert Suite with the Volga Band (Saratov, Russia). Perrine also gave master classes at the Saratov Conservatory and the Rostov On-Don Conservatory and well as at Moscow State University for Culture and Arts where he has been invited back to perform the Ingolf Dahl Saxophone Concerto. In addition to work abroad Perrine has also recently given live broadcast recitals with faculty members Eric Ziolek, Rock Wehrmann and Mark DeMio on WCLV in Cleveland, Ohio and performed with his own jazz quartet at Night Town (Cleveland Heights) and The Bop Stop (Cleveland, Ohio)

Paul Stranahan (gong array, singing bowls, drums, percussion) is a percussionist, composer, and teacher. He's led his own groups such as the modern jazz Paul Stranahan Trio, the avant/fusion band PSI-Paul Stranahan's Insomnia and the experimental group Night Terrors. Abstract Logix, a progressive instrumental magazine, said of Paul , “ As a drummer leading an ensemble with self-penned compositions Paul is occupying a mantle that few can approach.” A career highlight for Paul was when his trio and Red Side Visible (an avant/metal group Paul plays drums in and composes for) were 2 of the 4 American bands out of hundreds of applicants that were selected to perform in Belfort, France at FIMU (Festival International de Musique Universitaire). He also has a double CD release appropriately called "Gong and Singing Bowl Improvisations" on the Infinite Number of Sounds Label.