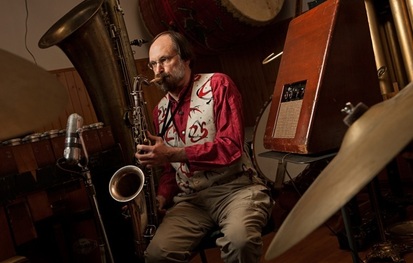 This special concert brings together two saxophone powerhouses: Howie Smith and Scott Robinson! Scott and Howie first played together almost 40 years ago. The last time they performed together as a duo was in Cleveland in 1998 as part of that year's Concert in Progress.

One of today's most wide-ranging instrumentalists, Scott Robinson has been heard on tenor sax with Buck Clayton's band, on trumpet with Lionel Hampton's quintet, on alto clarinet with Paquito D'Rivera's clarinet quartet, and on bass sax with the New York City Opera. On these and other
instruments including theremin and ophicleide, he has been heard with a cross-section of jazz's greats representing nearly every imaginable style of the music, from Braff to Braxton.

Primarily a tenor saxophonist, Scott placed directly below the great Sonny Rollins in this year's DownBeat Readers Poll. Scott has been heard numerous times on film, radio and television, and his discography now includes more than 240 recordings. His releases as a leader have garnered five-star reviews from Leonard Feather, Down Beat Magazine and other sources worldwide, and have appeared in many "Best of the Year" lists. Scott's collaborators on disc have included Frank Wess, Hank Jones, Joe Lovano, Ron Carter, and Bob Brookmeyer, and he has been a member of Maria Schneider's Orchestra for twenty years.

The son of a piano teacher and a National Geographic writer/editor, Scott Robinson was born on April 27, 1959 in New Jersey, and grew up in an eighteenth century Virginia farmhouse. While in high school, he received the "Louis Armstrong Award," and the "Best Soloist Award" from the National Association of Jazz Educators. In 1981, he graduated from Boston's Berklee College of Music, and a year later became, at 22, Berklee's youngest faculty member.

Since moving to New York in 1984, Scott has been awarded four fellowships by the National Endowment for the Arts, and participated in a number of Grammy-nominated and Grammy-winning recordings. He has been profiled in new editions of the Encyclopedia of Jazz and Grove's Dictionary of Jazz, along with books by Royal Stokes, Nat Hentoff and others. In 1997, a 4-minute CNN program featured Scott and the giant contrabass saxophone which he used on his CD, Thinking Big.

Scott has been the winner of a number DownBeat Critics Polls and Jazz Journalists Association awards in recent years.Now a resident of Teaneck, NJ, Scott has constructed a studio/laboratory for sonic research, containing an astonishing assortment of instruments and devices. His first solo and collaborative recordings from this facility have begun to appear under his own ScienSonic Laboratories imprint. ScienSonic Laboratories, LLC has released some highly creative and far-reaching projects including Nucleus, Creative Music for 3 Bass Saxophones, and Live at Space Farms featuring longtime Sun Ra saxophonist Marshall Allen. In 2012, ScienSonic's recordings were certified by the Space Foundation as Certified Space Imagination Products, entitled to bear the Foundation's certification seal. Projects from ScienSonic Laboratories include recordings with Frank Kimbrough, Emil Viklicky, Marshall Allen, Henry Grimes and Roscoe Mitchell.

A respected performer in all areas of jazz, from traditional to avant-garde, Scott Robinson has arrived at his own unique musical voice which, as once described in a Northsea Jazz Festival program, "combines solid foundations with great daring".

A virtuoso saxophonist and composer, Howie Smith does not easily fit into a single category. As a performer he has worked with musicians, organizations and composers as diverse as Lester Bowie, John Cage, the Cleveland Orchestra, Mark Dresser, Iron Toys, Mike Nock, Elvis Presley, Clark Terry, and the Tone Road Ramblers. His recorded performances range from the big bands of Phil Wilson and Frank Mantooth to the Australian quartet Jazz Co/op to saxophone concertos by David Baker, Salvatore Martirano and Edward Miller. He has also presented numerous concerts and workshops throughout the United States, Canada, South America, Europe and Australia.

His catalog of compositions includes works for conventional big bands and combos; for string, wind and percussion ensembles; for electronics; and for mixed media. Recordings of his work may be heard on the Albany, New World Records, Philips Phonogram, Polydor, and Sea Breeze labels, and his music for jazz ensembles is available through the Doug Beach/Kjos, Kendor Music Inc., and Otama Music. He has received two Fulbright grants, was awarded the Cleveland Arts Prize for Music in 1985, has been the recipient of an Individual Artist Fellowship from the Ohio Arts Council on seven different occasions, and in 2012 was awarded a Creative Workforce Fellowship from Cleveland’s Community Partnership for Arts and Culture. He has twice served as co-chair of both the Jazz Fellowships and the Music Overview panels of the National Endowment for the Arts, and has been associated with Yamaha as an artist/clinician since 1971.