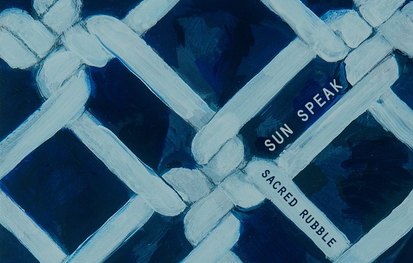 We loved hearing them on the air with Dee Perry and their show at BOP STOP in September of 2014 was a blast. Therefore, we wanted to present them again!

The new Chicago-based duo SUN SPEAK is comprised of longtime collaborators Matt Gold (guitar) and Nate Friedman (drums and percussion). Born from short improvisations between classes at the Oberlin Conservatory of Music, the duo solidified its intentions during a month-long artists’ residency in the mountains of New Hampshire in the summer of 2013. After shouting “Clarity!” at each other for days on end, SUN SPEAK began to find their musical voice, combining elements of rock, jazz, Afro-Brazilian, and contemporary classical music to create new works of electric chamber music. They composed and recorded their debut album Light Blue Light during those weeks, surrounded by apple and blueberry orchards.

On this tour, the band will be promoting their new album Sacred Rubble which will be released on 9/4/15.