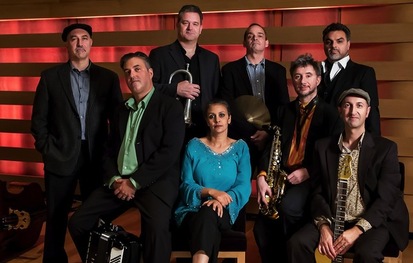 Michael Occhipinti’s Sicilian Jazz Project has been dazzling audiences world-wide with its intriguing mix of Sicilian folk material and the best elements of modern jazz, world music, funk, blues, and chamber music. Using Sicilian folk music as its starting point, the group takes the audience on a journey that reveals the drama and passion of Sicily’s past and showcase the global sound and great musicianship of modern day Toronto, Canada.

The Sicilian Jazz Project has been called “a masterpiece of cultural fusion” and received a 2009 JUNO Award nomination (Canada’s Grammy Award). The recording also resulted in the prestigious Ragusani nel Mondo Award being presented to Michael and Roberto Occhipinti in Ragusa, Sicily in 2009, and in 2010 Michael Occhipinti received a Chalmers Fellowship to live in Sicily and explore the folk culture there further.

The Sicilian Jazz Festival has brought its captivating and infectious live show to music festivals across Canada, Italy, the USA, and Mexico. Mixing a unique repertoire, great story-telling, and some of Canada’s best jazz and world music musicians, the band is not to be missed live. The Sicilian Jazz Project is now working on a follow-up to its acclaimed debut, to be completed in 2013.

An eight-time JUNO Award (Canada’s Grammy) nominee for Best Contemporary Jazz Album, Michael Occhipinti is a modern guitarist/composer interested in creative music of all kinds, and this approach has earned him an array of listeners and the respect of critics and musicians. As a leader of the jazz orchestra NOJO, Shine On: The Universe of John Lennon, and numerous other projects, Michael has established himself as an inventive composer/arranger, and his recording Creation Dream – The Songs of Bruce Cockburn was singled out by National Public Radio in the U.S. as an essential recording for Americans interested in Canada. Michael has worked with some of the most celebrated names in jazz, including clarinetist Don Byron and the late Sam Rivers, who each recorded and toured with NOJO, and Joe Lovano, Ray Anderson, Kenny Wheeler, and saxophonist Jeff Coffin (Dave Matthews Band), who is featured on Michael’s group The Triodes Chunked. Michael Occhipinti’s newest recording Shine On: The Universe of John Lennon was named a Top Pick of 2012 by Jazz FM.