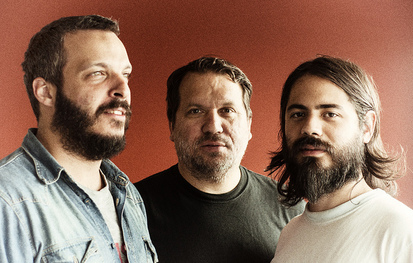 In 2006, Rob Mazurek (Exploding Star Orchestra, Black Cube SP, Pulsar Quartet, Rob Mazurek Octet) and Mauricio Takara (M.Takara 3, Hurtmold) released the group’s debut album, Sauna: Um, Dois, Três, to much international acclaim, and began performing live as a duo. In 2008, with new members, Guilherme Granado (Bodes e Elefantes, Hurtmold) and Richard Ribeiro, the ensemble released their second album The Principle of Intrusive Relationships, which was rated among the Top 50 Records of 2008 by The Wire. The third record, Três CabeÇas Loucuras, also features the quartet and was released by Cuneiform in 2011. Três CabeÇas Loucuras was listed among the top 10 records of 2011 in Time Out Chicago.

You can listen to a sample of Beija Flors Velho E Sujo at: http://cuneiformrecords.bandcamp.com/album/beija-flors-velho-e-sujo

You can learn more about São Paulo Underground at the followinglink: http://www.cuneiformrecords.com/bandshtml/saopaulo.html

"Limitless in its possibilities." - Rolling Stone

“The Post-Don Cherry melodic splendor of Chicago cornetist Rob Mazurek has never been clearer, and it finds a simpatico home amid the polyrhythmic chaos forged by his Brazilian cohorts. This high-energy romp takes the sting out of the term fusion in the best possible way.”- DownBeat

“A modern approach to Brazil's Tropicália, that takes into account advances in sound manipulation and engineering. It is street music from the Brazilian subterranean avant-garde.” - All About Jazz