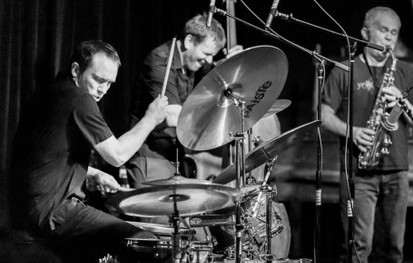 Tipple is the trio of David Watson, electric guitar, Kevin Norton, percussion, vibes and marimba, and Frode Gjerstad on alto saxophone, Bb clarinet, and bass clarinet. "No Sugar on Anything", the current album they are promiting, is their 3rd release, the previous being on FMR, while this is on Frode Gjerstad's own Circulasione label. Gjerstad also handles the mixing and mastering, while Lasse Marhaug provides the CD cover.

Tipple is a free improvising group, crossing the international boundary by joining the Norwegian Gjerstad with New York area players Watson and Norton. Watson performs on electric guitar, a quite different instrument from his frequent bagpipe forays, but his use of the guitar often brings the bluster of the bagpipe to call; at other times his playing is abstract but with a distorted edge, meandering around the point but always getting to it.

The communication between the trio is superb, and each release has brought a more telepathic link to their improvisations. The dialog ranges from very sparse conversation to emphatic and vigorous attacks, but never overwhelms the listener in chaotic ways. As Gjerstad comments on his website, "A nice little trio producing music that is not constantly loud, but reflective and moving." Space is a frequent ingredient to their playing, in call and response or slowly developing discourse.