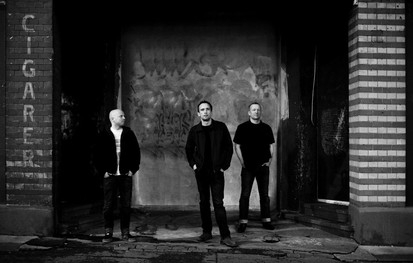 After forming in 1999 as a Don Cherry recording project, Scandinavian garage jazz trio The Thing soon established themselves as one of the most important European jazz groups, playing a variety of compositions, including material by PJ Harvey, Albert Ayler, The White Stripes, Steve Lacy, The Stooges, The Sonics, The Cramps, Lightning Bolt and The Ex. They transformed the music of these artists into a contemporary context, making it their own. As individuals or as a group, they have collaborated with those including, Peter Brötzmann, Sonic Youth, Jim O’Rourke, Thurston Moore, David Grubbs, Eye, The Ex, Pat Metheny, Arto Lindsay, Steve Reid, Kieran Hebden, Merzbow, Christian Marclay, The Nomads, Guy Picciotto, Neneh Cherry and more, all activities fueling the music of The Thing to become what the group is all about.After more than 600 concerts around the globe, five studio albums including their collaborative release with Neneh Cherry, a variety of live releases over the years, in 2013 The Thing presented their sixth studio album, BOOT! as the first release on their new label, The Thing Records. Since then they’ve released two EP’s, a live recording with Thurston Moore ‘LIVE’ and re-released their classic albums ’Garage’ and `Mono`.With dedicated fans in the rock, noise and jazz communities, The Thing continues to take the music to new, uncompromising levels and continues to solidify their important position in the contemporary independent music world. Mats Gustafsson is one of Europe’s biggest names on the music scene. Through groups like Gush, AALY trio, Fire! and Peter Brötzmann`s Chicago Tentet, he has established himself as a very powerful saxophonist, and has somewhat reinvented the way of playing the saxophone. In 2011 he received the Nordic Council Music Price: the largest price for a musician in the Nordic countries.

Ingebrigt Håker Flaten and Paal Nilssen-Love have become known as Norway`s heaviest rhythm-section. Since their long-time collaboration started in 1992, they have been working together in several groups like School Days with Ken Vandermark, Scorch trio with Raoul Björkenheim, and the Swedish/Norwegian jazz-group Atomic.