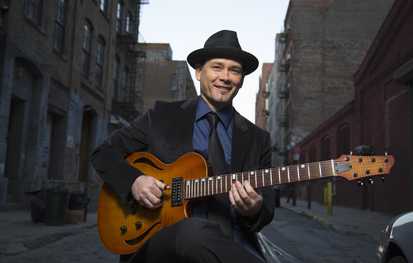 In the classic tradition of the jazz masters, guitarist/composer Adam Smale tells stories with his music. His “pen” is a personally designed 7-string guitar, wielded with both virtuosity and creativity. His tales are woven from his rich imagination stoked by a wide variety of musical influences and his latest CD, Out of the Blue fully attests to his compelling artistry. It’s his first CD since the release of his critically acclaimed Canadian release, Fun City.

Born in 1967 in a small working class community in Northern Ontario, Adam’s musical journey been at the age of 7 when, inspired by Country and Bluegrass styles he began playing guitar. By the age of 12 he was a professional, performing in clubs, bars, community events, weddings and private parties until he left for Humber College.

During these formative years, the young guitarist immersed himself in a wide variety of musical influences, but it wasn’t until his college years that he discovered jazz, and his path took a profound turn. Rather than abandoning his roots - or his earlier influences like Chet Atkins, Albert Lee, Eddie Van Halen, Flatt & Scruggs – Adam began to forge a new direction for himself in the classic tradition of true jazz expression. Discovering a goldmine of jazz guitar masters, including Pat Metheny, Pat Martino, Tal Farlow, Jim Hall, and John Scofield, along with Charlie Parker and Bill Evans, a new world of possibilities opened up for him.

But it was the music of the legendary Lenny Breau that had the greatest impact, not only in the direction of his music, but in the physical means by which he would choose to express it. Returning to the thumb-pick of his early years to employ a fingerstyle technique, Adam found his sound. To complete the process, Adam designed his own 7-string guitars and now primarily uses his specially-built electric and classical guitar as his two instruments of choice.

In 1992, Smale’s public career began in earnest. Covering all genres from country to Latin, Jazz to World, over the next 15 years Adam performed all over the world, including South America, India and the Middle East, as well as numerous cross-Canadian tours. Based in Toronto, he performed consistently with his own trio and quartet featuring outstanding Canadian musicians (sometimes including renowned bassist and drummer Don Thompson and Terry Clarke) and was a regular presence at the acclaimed Toronto Downtown Jazz Festival, and was featured at the prestigious Grand Prix du Jazz at the 2002 Montreal Jazz Festival. In 1996 Adam co-founded the experimental ensemble Camarillo, which performed together until 2007.

The educational realm is an important part of Adam’s focus. He has conducted master classes and seminars throughout the U.S. and Canada for Guitar Workshop Plus and the National Guitar Workshop. Adam has also written and published the book New Approach to Scales for Guitarists: A Practical Modern Direction. He received his Masters Degree in Jazz Performance from Western Michigan University in 2009.

That same year Adam moved to New York City where he is now focusing primarily on his quartet. He is currently arranging to tour behind the release of Out of the Blue, ready to establish his own place in the forefront of today’s guitar masters.