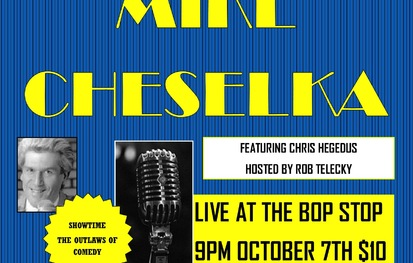 Please join us for an evening of laughter presented by The Cleveland Comedy Festival. This month we feature Mike Cheselka.

Michael has spent more than 15 years touring all 50 states and 17 foreign countries as a headlining comedian.

Michael's career includes appearances on HBO, Showtime, various sitcoms and several motion pictures. He is a regular at the Improv Comedy Club and appears weekly on the Fox TV8 morning show in Cleveland, Ohio.

Michael began his career in comedy as one of the original "Outlaws of Comedy" with the late Sam Kinison. While honing his craft at the infamous LA Comedy Store, (prior to being "discovered" by Kinison), he had the pleasure of performing with Jerry Seinfeld, Robin Williams, Paul Reiser, and the late Phil Hartman.