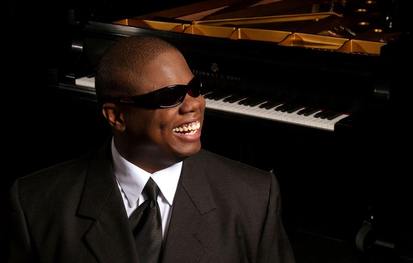 Join us as we welcome one of our hometown heroes, Joe McBride!

Born and raised in Fulton, MO, keyboardist/singer Joe McBride began playing the piano at age four. His uncle Bake McBride was an outfielder for the St. Louis Cardinals and the Cleveland Indians. His earliest influences were gospel music, bebop, straight-ahead jazz, Motown, and ’70s R&B and funk. As a teenager, he began singing and playing at jazz clubs. Around this time, McBride was stricken with a degenerative eye disease that eventually claimed his sight, but his passion for music didn’t diminish. He continued his musical studies at the Missouri School for the Blind and Webster University in suburban St. Louis, where he majored in jazz performance. He also attended the University of North Texas. Around 1983,McBride trekked to San Diego, CA, a bastion of smooth jazz radio. He began playing with the band Fattburger and guitarist Steve Laury.

In 1985, McBride visited his brother in Dallas, TX. What was originally planned as a two-week visit evolved into an abundant opportunity. He was flooded with performing offers, leading to McBride becoming a popular musician of the city’s jazz club scene. During that time he met a young trumpeter named Dave Love at a function for North Texas State University. The two became fast friends and when Love ventured into the other side of the music business and started the Heads Up International label, the executive remembered the soulful pianist/vocalist he had met in Dallas and signed him to a record deal. In 1992, the keyboardist was featured on Heads Up labelmate Kenny Blake’s debut, “Interior Design,” and began touring with the Heads Up Superband along with Blake, Gerald Veasley, and Henry Johnson. McBride has also been the opening act for Whitney Houston, Larry Carlton, and the Yellowjackets. His reputation has reached overseas, making McBride a favorite in Europe and Spain.

McBride’s debut album, Grace, released in 1992, instantly made him a core artist at smooth jazz radio. McBride’s other albums released during the ’90s include “A Gift for Tomorrow” (1994), “Keys to Your Heart” (1996), and “Double Take” (1998). A stellar guest list of artists that have appeared on his releases includes Grover Washington, Jr., Richard Elliot, Phil Perry, Peter White, Dave Koz, Rick Braun,and Larry Carlton, among others.

At the start of the 21st century, McBride’s long sought-after dream was realized: an album that featured his band, the Texas Rhythm Club. His CD Texas Rhythm Club was recorded in his home base of Dallas and issued by Heads Up International on June 27, 2000. Highlights are “Howzit in Dallas,” “Everything Remains the Same,” the tender ballad “It’s You,” the snappy “Lone Star Boogie,” and the humorous “Texas Blues Cruise.” His recorded output has continued during the new millennium, as 2002 saw the release of “Keepin’ It Real,” while “Texas Hold’em” came out in 2005. “Lookin’ for a Change” appeared in 2009 from Heads Up Records.