New Music Extravaganza with Jon Mueller and Others @ BOP STOP 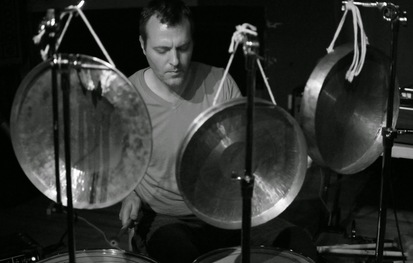 New Music Extravaganza with Jon Mueller and Others @ BOP STOP

"A complex experience you touch, live in, and meditate on." - NPR

"Cerebral, emotional, and spiritual in nature." - A Closer Listen

HIGH AURA'D & MIKE SHIFLET
https://highaurad.bandcamp.com/album/awake
"John Kolodij (aka High Aura’d) and Mike Shiflet each make ambient guitar drones so rich and dense that it's hard to imagine adding them together without cancelling something out. How could one record contain this much sound? The pair have figured out a way on their first collaborative album, Awake, and opener "Parlour Games" gets it right immediately. The magic is in the detail: though the sounds are abstract, they are also super tactile. In places, it feels as if you can see the high-pitched whirrs and the far-off echoes; the thick reverberations remain distinct. Most impressive is the way the track slowly builds and gathers steam without calling attention to that arc. Just focus on the little ripples circling around you—before you know it, you're riding a much bigger wave."
-Marc Masters, Pitchfork
'Parlour Games' on NPR


FOREST MANAGEMENT
http://forestmanagement.us/
“Perpetual melancholist John Daniel has been on the tip of the tongue of every follower of the Drone and Ambient game for a handful of years now, quietly issuing release after release of subtly whistful and supremely blissed-out sounds as Forest Management. As time goes on, though, the Cleveland-based musician has managed to create some of the most moving music in the overlap of those heady genres, including Reservation (Death Rehearsal, 2014) and Encounter (Martinson, 2015).”
-Bobby Power, Decoder Magazine

'Hidden Sanctuary'
ANDREW KIRSCHNER
Andrew Kirschner is a experimental/noise artist from Cleveland,Ohio. He is in multiple groups aside from his solo work. Kirschner also runs the Cleveland-based label Mistake By The Lake.