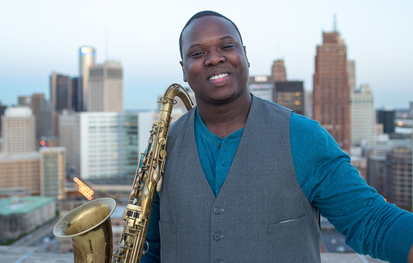 This concert is produced with the support of The Bassmint.

The number of exceptional young jazz musicians in Detroit these days is an everyday reminder of how fertile the soil remains in the city for nurturing the music. What is especially rewarding is how many of these players are well on their way to developing individual voices.

At 27, tenor saxophonist and native Detroiter De’Sean Jones, who will be celebrating the release of his debut CD, “Knomadik Reverence” (Detroit Music Factory), at BOP STOP on October 14th at 8pm, has a sound as broad as the shoulders of his thick frame. Jones has an unselfconscious way of channeling his influences, which range from jazz to hip-hop, techno, rock and gospel, into something personal.

And despite what at first glance might appear to be a surface eclecticism, the music on “Knomadik Reverence” reads unmistakably as jazz — improvisatory, interactive and in touch with the tradition, even when it veers into contemporary vernacular.

Jones comes by all of his influences honestly. He was mentored by the late Detroit jazz trumpet legend Marcus Belgrave, and he put in time at Michigan State University with bassist Rodney Whitaker and at the Oberlin Conservatory. But he’s also a member of the Detroit techno music collective Underground Resistance, and he has toured with artists as diverse as Stevie Wonder, the Clark Sisters and Faith Evans.

The CD features Jones leading a septet of peers with connections to Oberlin through all-original material, most of it by Jones and filled with lots of contrasting rhythms, textures and dynamics. The group moves easily between lean, swinging post-bop passages and dense and slightly raw, guitar-drenched textures and bass and drum beats that sound like souped-up hip-hop, R&B and rock grooves. Jones’ solos move from simmer to boil quickly, but he avoids easy grandstanding and long soliloquies. -Mark Stryker