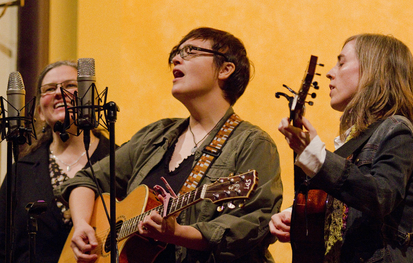 A new thread in the rich tapestry of American roots music, The Early Mays have burst on to the scene with a #2 debut on the National Folk-DJ charts. Rhythmic, evocative, dark and wistful, their Appalachian-inspired songs are built on deep country sensibilities, masterful ballad singing and a sweet old-time sound. Fiddle, banjo and guitar are the backdrop for vocal harmonies that "bring traditional and original material to spectacular life" (Cindy Howes, Folk Alley/WYEP).

Since the beginning, The Early Mays have shared songs based in a love of American tradition, as well as an exploration of their own songwriting voices. They first sang together at a candle-lit concert of Appalachian music on Christmas Eve, and this meeting evolved into a tour, a trio, and a friendship of three women.

Judith Avers, Emily Pinkerton and Ellen Gozion celebrated many musical milestones as solo artists before becoming a trio. Judith’s songs took her to the winners’ circle in the Woody Guthrie Songwriting Competition, and to the final rounds in Dave Carter and Falcon Ridge contests. Emily traveled–fiddle and banjo in hand–on a Fulbright grant to South America, and shared her life-long love of Chilean folk music in an interview on NPR’s All Things Considered. Ellen showcased her ballad singing and visual art as an instructor at the Augusta Heritage Center, and she was also a American Music Abroad finalist with the US State Department.

With co-producer Lurch Rudyk of Broadcast Lane Studios (Sara Harmer, Kathleen Edwards, Rufus Wainwright), The Early Mays have poured their hearts–and all their experience–into a new recording. Live takes and vintage microphones recreate the enveloping spirit of their concerts, and the analog production makes the album sound like a folk gem from the late 1960s. This new album, The Early Mays, shares the voices of these three friends – these three great musicians. It shares a spark that began three years ago and will hopefully leave you shining a little more brightly because of it.