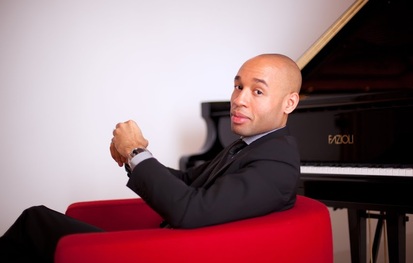 Pianist Aaron Diehl is one of the most sought after jazz virtuosos, consistently playing with what The New York Times describes as “melodic precision, harmonic erudition, and elegant restraint.” Diehl’s meticulously thought-out performances, collaborations, and compositions are a leading force in today’s generation of jazz contemporaries, spearheading a distinct union of traditional and fresh artistry.

The Bespoke Man’s Narrative (2013), Diehl’s debut album, reached No.1 on the JazzWeek Jazz Chart and was hailed by JazzTimes for displaying “precision and polish.” KCRW praised the album, stating, “This is an album you can listen to again and again, honest music that invites you back in to discover new wonders with each listening.”

Live at the Players (2010) featured both of his trios: Quincy Davis and David Wong, and Paul Sikivie and Lawrence Leathers. His first solo album, Live at Caramoor (2008), was a concert recorded at the Caramoor Festival.

Diehl’s recent collaborations with internationally acclaimed artists and ensembles include: Warren Wolf, Lew Tabackin, Matt Wilson, Wycliffe Gordon, Wynton Marsalis and his Septet, and the Jazz at Lincoln Center Orchestra. As the 2014 Monterey Jazz Festival Commission Artist, Diehl became one of the youngest artists to receive this honor and composed Three Streams of Expression, dedicated to pianist and composer John Lewis. He is also the 2013 recipient of the Jazz Journalists Associations Award for Up-And-Coming Artist, the 2012 Prix du Jazz Classique recipient for his album Live at the Players from the Académie du Jazz, and is the winner of the 2011 Cole Porter Fellowship from the American Pianists Association. In an effort to nurture the development of young jazz artists and the community, Diehl was the inaugural Artistic Director of the Catskill Jazz Factory.

Aaron Diehl is a graduate of the Juilliard School, where he studied with Kenny Barron, Eric Reed, and Oxana Yablonskaya. Residing in Harlem, he enjoys spending time in the sky when he isn’t on tour or recording. As a licensed pilot, one of his favorite planes to fly is the Beechcraft Bonanza.